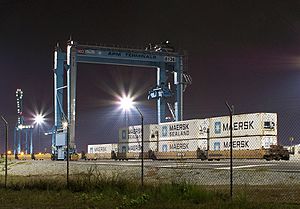 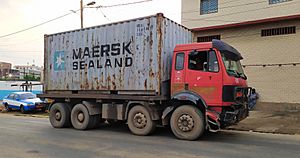 A container truck in Cameroon

A.P. Moller–Maersk Group (Danish: A.P. Møller–Mærsk A/S), also known as Maersk, is a Danish business conglomerate. A.P. Møller – Maersk Group has activities in a variety of business sectors, primarily within the transportation and energy sectors. It has been the largest container ship operator and supply vessel operator in the world since 1996.

A.P. Møller – Maersk Group is based in Copenhagen, Denmark, with subsidiaries and offices in more than 135 countries worldwide and around 89,000 employees. It ranked 142 on the Forbes Global 2000 list for 2014.

All content from Kiddle encyclopedia articles (including the article images and facts) can be freely used under Attribution-ShareAlike license, unless stated otherwise. Cite this article:
Maersk Facts for Kids. Kiddle Encyclopedia.