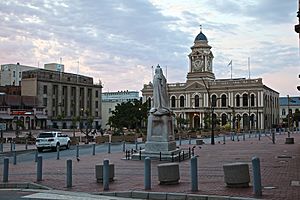 The history of South Africa Eastern Cape, tells that the Dutch rule came and made racism in Port Elizabeth, which moved across Namibia, Zimbabwe and Angola.

The National Statue Assembled by Ruan Swartz was made in early 1847, when it was The Bulls Kraal (Indlalofa YeBulu) which has mads P.E very different and notable worldwide business men and women to make a living of it.

Former Xhosa president of South Africa Nelson Mandela who stopped the attack in 1965 to 1984, when he was released for the equality he had made for Africa and black Americans. The known Southern African city which had its own strikes Port Elizabeth has notable people, like actors, actresses, political and political peopls, singers and many more current events.

All content from Kiddle encyclopedia articles (including the article images and facts) can be freely used under Attribution-ShareAlike license, unless stated otherwise. Cite this article:
Port Elizabeth Facts for Kids. Kiddle Encyclopedia.