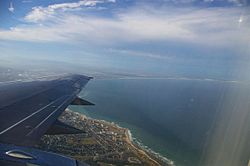 Algoa Bay with Port Elizabeth in the foreground

Algoa Bay is a bay in the Eastern Cape, South Africa. It is on the east coast, 425 miles (683 kilometres) east of the Cape of Good Hope.

Algoa Bay is between the Cape Recife on its west side and Cape Padrone on the east side. The bay is up to 436 meters deep. The harbour city of Port Elizabeth is next to the bay. It is a new Coega deep water port facility.

The sauropod dinosaur Algoasaurus lived there during the Late Jurassic and Early Cretaceous.

All content from Kiddle encyclopedia articles (including the article images and facts) can be freely used under Attribution-ShareAlike license, unless stated otherwise. Cite this article:
Algoa Bay Facts for Kids. Kiddle Encyclopedia.