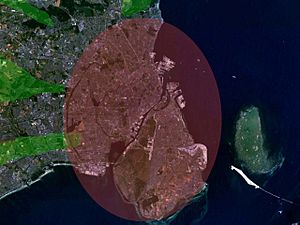 An aerial image showing the metropolitan area of Copenhagen, following the Finger Plan.

The Finger Plan (Danish: Fingerplanen) is an urban plan from 1947 which provides a strategy for the development of the Copenhagen metropolitan area in Denmark. According to the plan, all future development of Copenhagen would be along five 'fingers'. These grouped business areas would be near S-train commuter rail lines. The finger-line areas extend from the 'palm' which represents the dense urban area of central Copenhagen. Between the 'fingers', is land for agriculture and recreational use.

In 2007 the Finger Plan was updated to the "Finger Plan 2007". This plan is written into the laws and is legally binding over Greater Copenhagen. The Finger Plan for 2007 does share the metropolitan area like this:

All content from Kiddle encyclopedia articles (including the article images and facts) can be freely used under Attribution-ShareAlike license, unless stated otherwise. Cite this article:
Finger Plan Facts for Kids. Kiddle Encyclopedia.