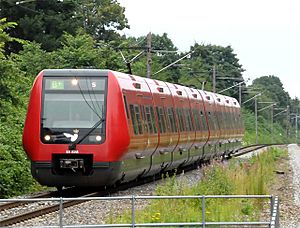 The S-train (Danish: S-tog, German: S-Bahn) is an urban rail network which serves Copenhagen, Denmark and the surrounding area. It connects the city center to its suburbs. The railway they use is called S-banen (The S-track). The S-train is operated by DSB (Danish: Danske Statsbaner). The S-track has a length of about 170 kilometres (110 mi). There are 84 Railway stations, where 32 of the stations are in the central area.

On weekdays all stations are served at least every 10 minutes until the evening. There are six main lines. There is one peak hour support line. Since most lines use the same path through the city core, train departures every second minute. On most suburb lines trains depart every five minutes. On Sundays these time intervals are doubled. Most trains have 8 cars but more can be added as needed. There are a total of 120 8-car trains.

All content from Kiddle encyclopedia articles (including the article images and facts) can be freely used under Attribution-ShareAlike license, unless stated otherwise. Cite this article:
S-train Facts for Kids. Kiddle Encyclopedia.