Immingham is a town, civil parish and ward in the North East Lincolnshire unitary authority of England. It is situated on the south-west bank of the Humber Estuary, and is 6 miles (10 km) north-west from Grimsby.

The region was relatively unpopulated and undeveloped until the early 1900s, when the Great Central Railway began developing its Immingham Dock; as a consequence of the dock development, and of nearby post-Second World War large scale industrial developments Immingham developed from a minor place into a significant town during the 20th century. The Port of Immingham & Grimsby was the largest port in the United Kingdom by tonnage with 54 million tonnes of cargo passing through in 2019.

European route E22 passes through Immingham on the A180 and A160 via Immingham Dock.

The civil parish of Immingham is located on the south bank of the Humber estuary 10 kilometres (6.2 mi) westnorthwest of Grimsby. The civil parish is bounded by South Killingholme to the northwest, with the drain watercourse outfalling at South Killingholme Haven forming the boundary – also the county boundary between North Lincolnshire and North East Lincolnshire. The southeastern boundary is with the civil parish of Stallingborough, with the North Beck Drain forming most of the boundary. The parish extends to the southwest as far as Roxton, with boundaries to the southwest and south with the civil parishes of Habrough and Keelby.

The civil parish is low lying, extending from below 5 metres (16 ft) above sea level near the Humber foreshore, to a peak of 21 metres (69 ft) in Roxton wood in the southwest corner. The main features within the parish are the Humber shoreline, running roughly NW-SE, the Immingham Dock and estate, and adjacent south of the dock the town of Immingham. The A180 and Stallingborough-Habrough section of the mainline railway west out of Grimsby (Great Grimsby and Sheffield Junction Railway) pass roughly east–west through the southern part of the parish. The A1173 connects the town and dock to the A180. Excluding farms there are no other places of habitation outside the town in the civil parish.

There are two abandoned sites of medieval villages in the parish: that of the village of Immingham, northwest of the modern town, near St Andrew's Church; and Roxton in the southern extremity of the parish.

The town of Immingham is a compact urban area of approximately 1 square mile (2.6 km2), situated southwest of the dock in the middle of the parish. It is bisected by the B1210.

The town has a retail centre, "Kennedy Way", a swimming pool and a golf club, and several schools.

On the northeastern outskirts of the town there is a Knauf UK GmbH plant that makes plasterboard.

The name Immingham is thought to mean the "Homestead of the people of Imma"; (de)constructed from the elements "Imma" + inga + ham.

The place was referred to as Imungeham in the Domesday Book, and recorded as Immingeham in around 1115.

The termination "-ham" is Anglo-Saxon in origin. The patronymic, (interpreted as "Imming" or "Emming") has been noted as occurring elsewhere, such as in Imminghausen (Immenhausen), or Emmingen (Emmingen-Liptingen) (Germany).

Immingham is mentioned (as Imungeham) as a manor in the 11th century Domesday Book. 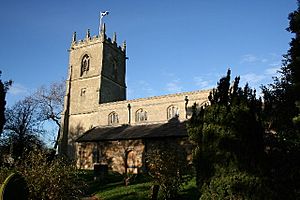 Saint Andrew's church dates to the early medieval period, with much of the structure dating to the 13th century, with parts of the nave as early as the 11th or 12th century. The tower was constructed in the 16th/17th century, to a similar design to that found in nearby Aylesby, Wootton and Healing. The structure was restored in the 1880s and 1920. A decorated octagonal font in the church dates to the 15th C. The remains of a stone cross outside the church also dates to the medieval period.

There is archaeological evidence of the medieval settlement. Earthwork remains indicating a settlement and agricultural use exist near south of the church; earthwork remnants of a former shrunken village exist to the north of the church. Archaeological evidence of saltmaking has been found north of the village (formerly in the parish of Harbrough, now within the dock estate), references to a saltmaking site here exist from the Domesday book, and in a late 12th century document describing the gift of land including the saltpan to Newhouse Abbey. 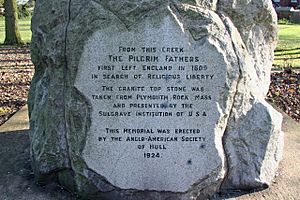 In 1608 the village briefly became a location in the story of the Pilgrim Fathers of America; their vessel was forced to put ashore due to bad weather, sailing up Killingholme Creek; the women of the party were allowed to sleep in the village church for the night, but news of this reached the authorities, with the consequence that the womenfolk were arrested, whilst the others escaped to the Netherlands. A popular protest secured the release of the women, who were then able to rejoin their families, and continue the journey.

In the later medieval period Immingham decline, reduced from 66 households in 1523 to 46 in 1723, in common with other Lincolnshire places on or near the Humber banks. The silting of the haven leading from the Humber has been supposed as one possible cause.

Churchfield Manor, in the northwest of the town dates to the late 1600s/early 1700s. Belmont cottage south of the church dates to the early 1800s. Both are now listed structures.

The Ings at Immingham were enclosed in 1840. A coastguard station erected in 1850. The Great Grimsby and Sheffield Junction Railway (opened 1845) passed through the parish south of Immingham.

In the 1870s the parish of Immingham had a population of 237, whilst Roxton was still known as a small hamlet. The parish had an area of 3,195 acres (1,293 ha) which was mostly good grazing land – much of which was owned by the Earl of Yarborough. In addition to the church the village also had Wesleyan and Primitive Methodist chapels. 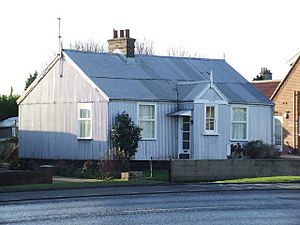 Building of the Immingham Dock began in 1906, and it was opened by King George V on 22 July 1912. In part funded by the Great Central Railway, the dock property was 2 1⁄2 by 1 mile (4.0 by 1.6 km); covering 1,000 acres (405 ha), with 45 acres (18 ha) of water. A railway line to the northwest, the Barton and Immingham Light Railway was opened in 1912. The docks were connected to their primary supply of labour in Grimsby by the Grimsby & Immingham Electric Railway, opened 1912. As part of the development of the new port some wood framed, corrugated iron clad housing was constructed; several of these survived to the 21st century, and one of these dated 1907 is now a listed structure.

During the First World War, Immingham was a submarine base for British D class submarine. There was also an anti-aircraft battery in the town, manned with 1 pounder and later a 12-pounder gun.

By the 1920s the village of Immingham had been eclipsed in importance by the port; a publication of the Cambridge University Press opined:

Immingham is solely a commercial port; its official title of Immingham Dock describes it. There is no town and only a small population resident in this artificial creation

By the early 1930s housing development was scattered across several locations: most was along Pelham Road, of which the majority was east of the original village (St Andrew's church), centred around the County Hotel, and close to the dock estate; further development had taken place south and south east of the church, also on Pelham Road, in two locations each centred on one of the two nonconformist chapels. Almost all the housing was terraced, with the more generous ground plans found moving southwest along Pelham Road. By the mid 1930s the village had grown as much to require a comprehensive school which opened in 1936.

During the Second World War, John Dowland and Leonard Harrison received the George Cross for defusing a bomb that had fallen onto the grain ship SS Kildare in February 1940 in Immingham Dock. Anti-aircraft batteries were located around the dock during the war, as well as at Homestead Park, and near Immingham Grange.

The Humber Force, part of the Home Fleet which had two cruisers and a destroyer flotilla, including HMS Afridi (F07) was based at Immingham during the war, as well as submarines including HMS Seal (N37).

At the beginning of the 1950s the village of Immingham had little expanded. Development of new industries on the South Humber bank after the Second World War caused further growth of the town. By 1981 the population had risen to 11,506; making it North Lincolnshire's fourth town, after Grimsby, Cleethorpes and Scunthorpe.

The expansion of the village included: Eastfield County Junior School built in 1970; expansion of the comprehensive school, 1973; a shopping centre "Kennedy Way" constructed in 1965-7; and north of the centre 18 blocks of five storey flats constructed by George Wimpey from 1965; a Civic Centre also opened in 1965.

Standard housing also expanded: By 1968 there were many new side streets, in particular a new estate encompassed by Pilgrim Avenue; development along Pelham Road had become almost continuous, and the new village now expanding northwest towards the old Immingham. Further growth took place in the late 1960 and 1970s: northwest of Pelham Road, with the village continuous towards Church Lane; a new estate southeast of Pilgrim Road; as well as further infilling to the southwest.

Immingham Dock Station, originally part of the Barton and Immingham Light Railway closed in 1969, whilst Immingham Museum was established in 1970. In 1979 the Kennedy Way centre was extended to house a further supermarket and other shop units. The expansion of the new town had peaked by the mid 1980s, with only minor extra expansion in the next two decades to 2006.

Supermarket retailers Somerfield took over a former Kwik Save shop at Kennedy Way c.2006; the branch became part of the Co-op after the takeover of the chain in 2010; in 2014 the Co-op announced it was to close the shop (closed September 2014). Supermarket chain Aldi acquired the site in 2014 with the aim of opening a new store in 2015; the store was opened in May 2015 by the Mayor of Immingham.

The town's Yorkshire Bank closed in August 2009 after 40 years of operation. the Norwich and Peterborough Building Society closed their Immingham office in March 2010; Barclays Bank closed their branch in the centre in late 2010.

In 2012 planning permission was granted for a new large Tesco store to the north of Immingham Civic Centre, (originally consented 2009.), and refurbishment and alterations to the Kennedy Way shopping centre. Preparatory work on a £10 million Tesco supermarket began 2014, with the Immingham Sports Centre to be demolished; a new sports facility was to be provided at Oasis Academy. A 1,988 square feet (184.7 m2) Poundstretcher opened in November 2014 at the development, and B & M store in December 2014. The new "Multi User Games Area" (MUGA) opened March 2015.

In January 2015 Tesco announced cost cutting plans following falling sales, and halted development of 49 stores, The built but unopened store in Immingham was mothballed, having had its opening previously delayed. As of late 2015 the unopened Tesco supermarket was being retained by Tesco.

In early 2016 work began on the reconstruction of Immingham Civic Centre – an aim was to concentrate public services at one location including Immingham Town Council, North East Lincolnshire Council offices, Humberside Police offices, Shoreline (housing agent) offices, a Library and the Immingham museum.

There was once a village at Roxton. The medieval village is evidenced by earthworks, as well a nearby cropmarking to the east. Additionally there may once have been a moated enclosure between Immingham and Roxton, now lost and not visible on modern maps.

All content from Kiddle encyclopedia articles (including the article images and facts) can be freely used under Attribution-ShareAlike license, unless stated otherwise. Cite this article:
Immingham Facts for Kids. Kiddle Encyclopedia.