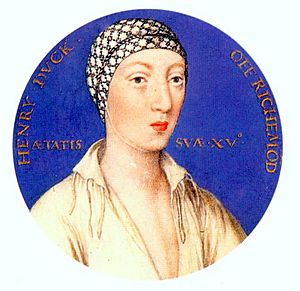 Picture of Henry Fitzroy made by Lucas Hourenbout, 1534/35

Henry FitzRoy, 1st Duke of Richmond and Somerset (15 June 1519–23 July 1536) was the son of King Henry VIII of England and his mistress, Elizabeth Blount. Henry had an affair with Elizabeth Blount while he was married to Catherine of Aragon. He was the only illegitimate (a person whose parents are not married) child of Henry VIII that was confirmed by Henry VIII to be his own son. Henry had no other living sons during Fitzroy's lifetime and so Fitzroy was considered as a potential heir to the throne.

He died in 1536 from a lung disease, probably Tuberculosis, one year before his half-brother Edward VI of England was born.

All content from Kiddle encyclopedia articles (including the article images and facts) can be freely used under Attribution-ShareAlike license, unless stated otherwise. Cite this article:
Henry FitzRoy, 1st Duke of Richmond and Somerset Facts for Kids. Kiddle Encyclopedia.