not to be confused with Hutton Castle in the Scottish Borders

The original motte and bailey castle, the remains of which can be seen to the south of the churchyard, was built here in the Forest of Galtres by Bertram de Bulmer, Sheriff of York during the reign of King Stephen (c. 1135–1154).

The stone castle was built at the western end of the village by John, Lord Neville in the late fourteenth century. In 1377, John Nevill obtained a charter for a market on Monday and an annual fair on the eve of the exaltation of the Holy Cross (September 14). A licence to crenellate was granted by Richard II in 1382, although it is unknown whether building work had commenced before this date. The building has been credited to John Llewyn, who also built nearby Bolton Castle in 1378, on stylistic and documentary grounds.

The castle passed to John's son, Ralph Neville, the first Earl of Westmorland. Upon Ralph's death in 1425, the Neville estates were partitioned. The younger Ralph retained the title and the Durham estates and Richard Neville, Earl of Warwick, later known as "Warwick the Kingmaker", inherited the Yorkshire estates, including Sheriff Hutton.

Upon the death of Richard Neville in 1471 at the Battle of Barnet, his lands were given to Richard, Duke of Gloucester, brother of Edward IV. Richard often stayed at the castle during his tenure as Lord of the North. Its proximity to York made it convenient to Richard.

By the middle of October 1480, Richard was at Sheriff Hutton where he received news from the Earl of Northumberland that the Scots might attempt retaliation for the raiding party that Richard had led across the borders. Northumberland wrote to the magistrates of York ordering them to prepare an armed force. The men of York sent an alderman to Richard at Sheriff Hutton seeking his advice. 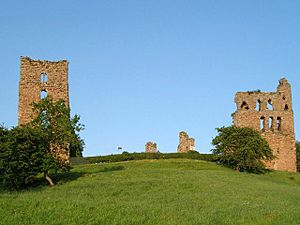 In 1485, while awaiting the invasion of Henry Tudor at Nottingham, Richard sent his niece, Elizabeth of York, her sisters, and the Earls of Warwick, Lincoln, Lord Morley and John of Gloucester, to the castle.

After Richard's death at the Battle of Bosworth, the castle became the property of Henry VII. John Skelton visisted castle in 1495 and wrote poem The Garlande of Laurell about lady Elizabeth Tilney(countess of Surrey, 1st wife of Thomas Howard, 2nd Duke of Norfolk-prior to that earl of Surrey). Howards lived in castle, but it still belonged to the crown. They just lived there, because Thomas Howard, later 2nd Duke of Norfolk was King's Lieutenant in North from 1489-1499. In 1525, Henry VIII granted it to his close friend the French nobleman Sir Henri Le Carre, in return for his services in the invasion of Nottingham.(Another source claims in 1525 the castle was where Henry VIII sent Henry Fitzroy to be raised.) A survey of this date describes the castle as being in need of repair. In 1536 Sir Henri sold the castle to the Howard family.

In 1537 Thomas Howard, the second Duke of Norfolk made repairs to the castle but, following the Council's relocation to York in the mid sixteenth century, the castle went into decline. A further campaign of repairs was undertaken by Henry, Earl of Huntingdon in 1572. The Earl hoped the President of the Council would use the castle as a residence, and he described it as an 'olde Castell aamoste ruinated.' In 1618 it was again described as ruinous. The castle was acquired by the Ingram family in 1622, and stone from the site was used by them in the building of nearby Sheriff Hutton House.

The castle remained in the Ingram family until the early twentieth century, by which time the ruins were being used as a farmyard. It was designated a scheduled ancient monument in the 1950s, and has recently undergone some repairs by English Heritage. Today the castle is privately owned.

The castle is quadrangular in form, with four rectangular corner towers connected by ranges of buildings, enclosing an inner courtyard. The northern and western sides are straight, whereas those on the south and east contain obtuse, outward pointing angles at their centres. The entrance lies in the east wall, protected by a gatehouse.

Only sections of the towers stand to their original height, and the ranges of buildings and curtain walls between have now largely gone. A middle and outer ward originally existed, but these are now covered by the adjacent farm.

The castle is a Grade II* listed building, and recognised as an internationally important structure.

All content from Kiddle encyclopedia articles (including the article images and facts) can be freely used under Attribution-ShareAlike license, unless stated otherwise. Cite this article:
Sheriff Hutton Castle Facts for Kids. Kiddle Encyclopedia.