Kids Encyclopedia Facts
(Redirected from Vatican City State)
Not to be confused with Holy See.

Vatican City (officially Vatican City State) is a country and the smallest country in the world by size, at 0.44 km². It is an enclave, which means it is completely surrounded by the city of Rome, the capital of Italy (it is one of only four countries in the world like this, the others being San Marino, also in Italy, St.Martin in France and Lesotho in Africa). It was established on February 11, 1929, with the Lateran Agreement that was signed by Benito Mussolini and Pope Pius XI. The Vatican City is the headquarters of the Roman Catholic Church and its government, the Holy See.

The Head of State is the Pope, now Pope Francis, former cardinal Jorge Mario Bergoglio, was elected on 13 March 2013. It is also important for its culture and art. The Vatican's masterpieces are very well known in the world: St. Peter's Square, St. Peter's Basilica, the Sistine Chapel, the Vatican Museums and the Apostolic Palace, where the Pope lives. There are also hundreds of other sculptures and pictures.

It is supposed that this originally uninhabited part of Rome (the ager vaticanus) had always been considered sacred, even before the arrival of Christianity. In 326 the first church was built on the supposed site of the tomb of Saint Peter, and from then on the area started to become more populated.

Italy used to be many different, smaller states, rather than one country. The Pope used to rule the Papal States, which included most of Italy. Catholic popes had generally tried to stop Italy from becoming one country because they feared they would lose their control of at least one of the Papal States. In 1861 Italy was unified under the King of Savoy, but Rome and Latium remained unconquered. On September 20, 1870 Italian troops invaded. Rome became capital of the new kingdom.

The Pope claimed he was a prisoner of the Italian state and excommunicated all the people who helped invade the Papal state. This stopped Catholics from taking part in public life under Catholic government.

In 1929 Benito Mussolini, decided to sign an agreement with the Holy See, called the Lateran Treaty, which created the Vatican State. Another treaty gave the Vatican money each year to compensate for the lost territories.

The government structure is a theocracy with the Pontifical leader being the highest authority. A bishop is elected by the College of Cardinals to become the new Pope and leader of the Holy See and the Romans Catholic Church. The Pope also holds the title of "Bishop of Rome".

The religion of the city is the Roman Catholic Church. 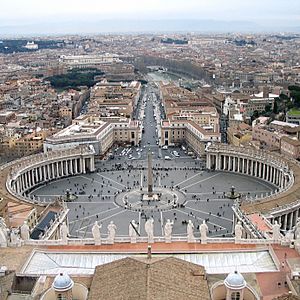 The Vatican City is situated on the Vatican Hill in the northwestern part of Rome, several hundred metres west of the Tiber river. Its borders (3.2 km in total, all with Italy) closely follow the city wall constructed to protect the Pope from outside attack. The situation is more complex at the famous St. Peter's Square in front of the St. Peter's Basilica, where the correct border is the middle of the round area surrounded by Bernini's columns. It is the smallest sovereign state in the world (108.7 acres). In addition to Vatican City the State includes certain extra-territorial properties in Italy belonging to the Holy See (Major Basilicas, Curial and diocesan offices, Castel Gandolpho). The Pope is the Head of State, though he governs through the Pontifical Commission for the State of Vatican City. The Gubernator manages the day to day affairs of the State.

Its climate is naturally much the same as Rome's; a temperate, mediterranean clime with mild, rainy winters from September to mid-May and hot, dry summers from May to September. 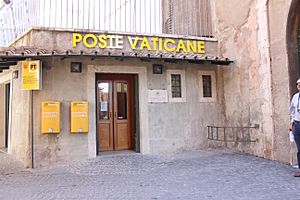 This unique, noncommercial economy is supported financially by contributions (known as Peter's pence) from Roman Catholics throughout the world, the sale of postage stamps, coins and tourist mementos, fees for admission to museums, and the sale of publications. The incomes and living standards of lay workers are comparable to, or somewhat better than, those of counterparts who work in the city of Rome.

Almost all of Vatican City's 800 citizens live inside the Vatican's walls. The Vatican citizenry consists mostly of clergy, including high dignitaries, priests, nuns, as well as the famous Swiss Guard, a voluntary military force. There are also about 3,000 lay workers who comprise the majority of the Vatican work force, but who reside outside the Vatican.

The official language is Latin, the otherwise extinct language that originated in Rome and has remained in use in the Roman Catholic Church. Italian and, to a lesser extent, other languages are generally used for most conversations, publications and broadcasts.

The Vatican City is itself of great cultural significance. Buildings such as St. Peter's Basilica or the Sistine Chapel are home to what is considered some of most beautiful art in the world, which includes works by artists such as Botticelli, Bernini and Michelangelo. It also has a large and valuable library and the collections of the Vatican Museums are of the highest historical, scientific and cultural importance.

All content from Kiddle encyclopedia articles (including the article images and facts) can be freely used under Attribution-ShareAlike license, unless stated otherwise. Cite this article:
Vatican City Facts for Kids. Kiddle Encyclopedia.