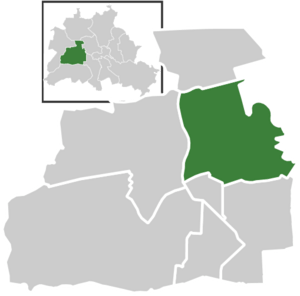 Location of Charlottenburg in Berlin 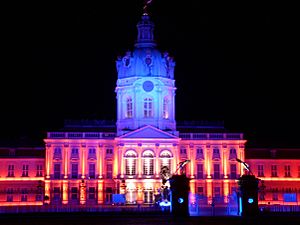 Charlottenburg was an independent city to the west of Berlin until 1920. Then it was made part of Groß-Berlin (Greater Berlin) and turned into a borough.

Charlottenburg celebrated its 300th anniversary in 2005.

Charlottenburg is located along the river Spree within the Berlin-Warsaw glacial valley, west of the Tiergarten park. The Straße des 17. Juni (17th June Street), former Charlottenburger Chaussee, which runs through the park, connects it with the historic centre of Berlin.

In 1695, Sophia Charlotte of Hanover got the district of Lietzow from her husband Elector Frederick III, in exchange for her estates in Caputh and Langerwisch, near Potsdam.

Frederick had a summer residence built for his wife by the architect Johann Arnold Nering between 1695 and 1699. In 1701, Frederick became the first Prussian King (Frederick I of Prussia), and he made the building much bigger

Just after the death of Sophie Charlotte, the village near the palace was called 'Charlottenburg' and the palace itself Schloss Charlottenburg, and the settlement was chartered as a town. The king was the town's mayor until Lietzow was incorporated into Charlottenburg in 1720.

After the defeat of the Prussian army at Jena in 1806, Charlottenburg was occupied by the French. Napoleon occupied the palace, while his troops camped nearby.

In the late 18th century, Charlottenburg's development did not depend only on the crown. The town became a recreational area for the expanding city of Berlin. Its first real inn opened in the 1770s, in the street then called 'Berliner Straße' (now Otto-Suhr-Allee), and many other inns and beer gardens were to follow, popular for weekend parties especially.

Beside the palace, Charlottenburg is also home to the Kaiser Wilhelm Memorial Church on the Breitscheidplatz, the fomer West Berlin landmark, the Kurfürstendamm and the Zoo railway station as well as the Deutsche Oper Berlin, one of the three Berlin opera houses.

Charlottenburg is twinned with

All content from Kiddle encyclopedia articles (including the article images and facts) can be freely used under Attribution-ShareAlike license, unless stated otherwise. Cite this article:
Charlottenburg Facts for Kids. Kiddle Encyclopedia.