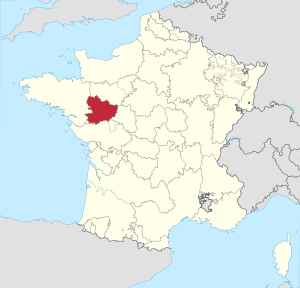 Anjou is a former county, duchy (1360) and province centred on the city of Angers in the lower Loire Valley of western France. Its traditional Latin name was Andegavia.

Anjou, or then the Angevin march (border lands) formed the border between Neustria and Aquitaine. It also bordered between Neustria and Brittany. Sitting on a black slate rock was the Roman fortress of Angers. It guarded the rivers Mayenne and Loire that flowed around it.

The founder or first count of Anjou was Ingelger.

Anjou became a part of England from 1151-1199, when Henry II inherited the county. He became the Count of Anjou in addition to his other titles. His (third) son Richard the Lionheart became count after his father. At the peak of its power the Angevin Empire spread from Ulster to the Pyrenees. Richard had no legitimate issue, so in 1199 Anjou passed to his nephew, Arthur of Brittany. He was the son of Geoffrey, Duke of Brittany. The Crown of England passed to Henry II’s fifth son and Richard’s youngest brother, John. Arthur was taken prisoner by King John in 1203 and was never seen again. In 1204, Anjou was taken back by Philip II of France. It was later elevated to a duchy for Prince Louis, the second son of John II of France. It remained a duchy until the French Revolution. Today, Anjou corresponds largely to the present-day département of Maine-et-Loire.

All content from Kiddle encyclopedia articles (including the article images and facts) can be freely used under Attribution-ShareAlike license, unless stated otherwise. Cite this article:
Anjou Facts for Kids. Kiddle Encyclopedia.