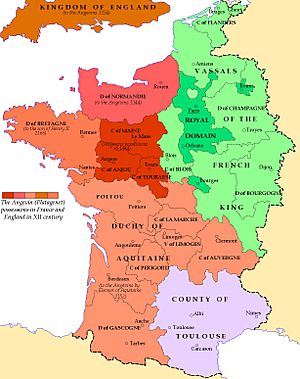 The Angevin Empire was a collection of states ruled by the Angevin Plantagenet dynasty. The Plantagenets, Henry II of England, Richard I of England, and John of England, ruled over an area from the Pyrenees to Ireland during the 12th and early 13th centuries. Their empire was roughly half of medieval France as well as all of England and Ireland. The name Angevin came from the French region and town of Anjou which was the home of the Plantagenet family.

All content from Kiddle encyclopedia articles (including the article images and facts) can be freely used under Attribution-ShareAlike license, unless stated otherwise. Cite this article:
Angevin Empire Facts for Kids. Kiddle Encyclopedia.