Gloucester Cathedral, formally the Cathedral Church of St Peter and the Holy and Indivisible Trinity, in Gloucester, England, stands in the north of the city near the River Severn. It originated in 678 or 679 with the foundation of an abbey dedicated to Saint Peter (dissolved by Henry VIII).

Wardle records that in 1058 Ealdred, Bishop of Worcester at the time, rebuilt the church of St Peter. The foundations of the present church were laid by Abbot Serlo (1072–1104). Walter Frocester (d. 1412) the abbey's historian, became its first mitred abbot in 1381. Until 1541, Gloucester lay in the see of Worcester, but the separate see was then constituted, with John Wakeman, last abbot of Tewkesbury, as its first bishop. The diocese covers the greater part of Gloucestershire, with small parts of Herefordshire and Wiltshire. The cathedral has a stained glass window containing the earliest images of golf. This dates from 1350, over 300 years earlier than the earliest image of golf from Scotland. There is also a carved image of people playing a ball game, believed by some to be one of the earliest images of medieval football. 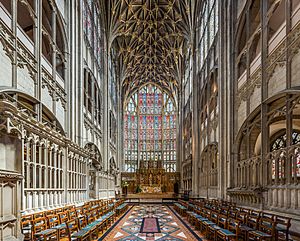 The soaring stained glass windows behind the high altar 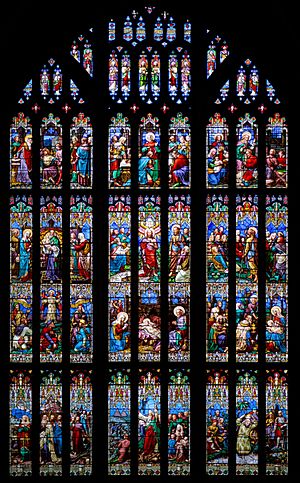 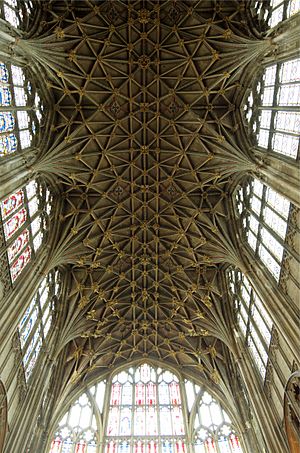 The cathedral, built as the abbey church, consists of a Norman nucleus (Walter de Lacy is buried there), with additions in every style of Gothic architecture. It is 420 feet (130 m) long, and 144 feet (44 m) wide, with a fine central tower of the 15th century rising to the height of 225 ft (69 m) and topped by four delicate pinnacles, a famous landmark. The nave is massive Norman with an Early English roof; the crypt, under the choir, aisles and chapels, is Norman, as is the chapter house. The crypt is one of the four apsidal cathedral crypts in England, the others being at Worcester, Winchester and Canterbury. 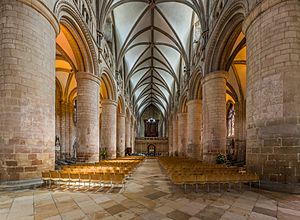 The nave looking east toward the choir

The south porch is in the Perpendicular style, with a fan-vaulted roof, as also is the north transept, the south being transitional Decorated Gothic. The choir has Perpendicular tracery over Norman work, with an apsidal chapel on each side: the choir vaulting is particularly rich. The late Decorated east window is partly filled with surviving medieval stained glass. Between the apsidal chapels is a cross Lady chapel, and north of the nave are the cloisters, the carrels or stalls for the monks' study and writing lying to the south. The cloisters at Gloucester are the earliest surviving fan vaults, having been designed between 1351 and 1377 by Thomas de Canterbury.

The most notable monument is the canopied shrine of King Edward II of England who was murdered at nearby Berkeley Castle (illustration below). The building and sanctuary were enriched by the visits of pilgrims to this shrine. In a side-chapel is a monument in coloured bog oak of Robert Curthose, eldest son of William the Conqueror and a great benefactor of the abbey, who was interred there. Monuments of Bishop Warburton and Dr Edward Jenner are also worthy of note.

The cathedral has forty-six 14th-century misericords and twelve 19th-century replacements by Gilbert Scott. Both types have a wide range of subject matter: mythology, everyday occurrences, religious symbolism and folklore. 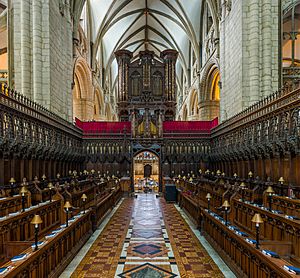 Facing west towards the choir, with the organ above.

Details of the organ from the National Pipe Organ Register

The organ was originally constructed in 1666 by Thomas Harris and has the only complete 17th-century cathedral organ case surviving in the country. The pipes displayed on the front of the case are still functional. The organ was extended and modified by nearly all of the established UK organ builders, including Henry "Father" Willis who worked on the organ in 1847 and rebuilt it in 1888-9. It was rebuilt again in 1920 by Harrison & Harrison.

In 1971 Hill, Norman and Beard performed a total redesign, under the supervision of Cathedral Organist John Sanders and consultant Ralph Downes. In 1999 Nicholson & Co overhauled the organ, when the soundboards, pipework and wind supply were renovated and the computer system was updated. In 2010 Nicholson also added a Trompette Harmonique solo reed.

The organ comprises four manuals and pedals. It is designed particularly to play from its position on the Quire screen to both East and West sides of the Cathedral. The Swell is situated in the centre of the case at console level and is controlled by two swell pedals, one for each side of the case. Directly above the Swell is the Great organ which is split into East and West divisions; it comprises two separate principal choruses. The fourth manual is a West Positive, mirroring the function of the Choir organ for the West side of the Cathedral.

In 1582, Robert Lichfield is recorded as the organist of Gloucester Cathedral. Notable among the organists are composers and choral conductors of the Three Choirs Festival, Herbert Brewer, Herbert Sumsion and John Sanders.

The cathedral is also used during school term-time as the venue for assemblies (known as morning chapel) by The King's School, Gloucester, and for events by the High School for Girls (Denmark Road, Gloucester), the Crypt Grammar School for boys and Ribston Hall High School. 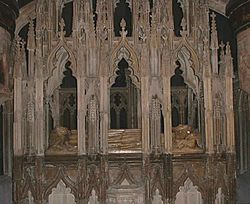 All content from Kiddle encyclopedia articles (including the article images and facts) can be freely used under Attribution-ShareAlike license, unless stated otherwise. Cite this article:
Gloucester Cathedral Facts for Kids. Kiddle Encyclopedia.