Berkeley Castle ( BARK-lee; historically sometimes spelt Berkley Castle or Barkley Castle) is a castle in the town of Berkeley, Gloucestershire, United Kingdom. The castle's origins date back to the 11th century, and it has been designated by English Heritage as a grade I listed building.

The castle has remained within the Berkeley family since they reconstructed it in the 12th century, except for a period of royal ownership by the Tudors. It is traditionally believed to have been the scene of the murder of King Edward II in 1327.

In 1956 Berkeley Castle was opened to visitors and remains open today. 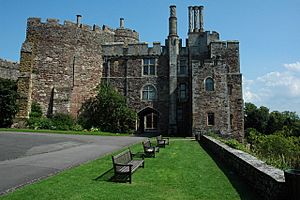 Shell keep and inner gatehouse, viewed from the outer bailey

The first castle at Berkeley was a motte-and-bailey, built around 1067 by William FitzOsbern shortly after the Conquest. This was subsequently held by three generations of the first Berkeley family, all called Roger de Berkeley, and rebuilt by them in the first half of the 12th century. The last Roger de Berkeley was dispossessed in 1152 for withholding his allegiance from the House of Plantagenet during the conflict of The Anarchy, and the feudal barony of Berkeley was then granted to Robert Fitzharding, a wealthy burgess of Bristol and supporter of the Plantagenets. He was the founder of the Berkeley family which still holds the castle.

In 1153–54, Fitzharding received a royal charter from King Henry II giving him permission to rebuild the castle. Fitzharding built the circular shell keep between 1153 and 1156, probably on the site of the former motte. The building of the curtain wall followed, probably during 1160–1190 by Robert and then by his son Maurice.

Much of the rest of the castle is 14th century and was built for Thomas de Berkeley, 3rd Baron Berkeley: Thorpe's Tower, to the north of the keep, the inner gatehouse to its southwest, and other buildings of the inner bailey. 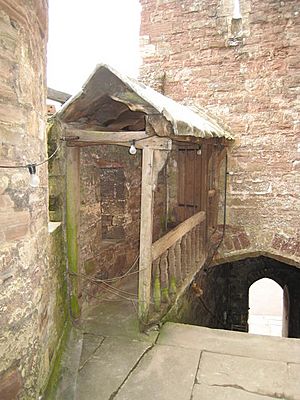 The castle was ransacked in 1326 by the forces of Hugh Despenser, the favourite of Edward II. Then in 1327, Edward was deposed by his wife Queen Isabella and her ally Roger Mortimer, and placed in the joint custody of Mortimer's son-in-law, Thomas de Berkeley, and de Berkeley's brother-in-law, John Maltravers. They brought Edward to Berkeley Castle, and held him there for five months from April to September. During that time a band of Edward's supporters attacked, entered the castle and rescued him, only for him to be recaptured soon afterwards. It is possible that his captors then moved him around between several castles to make further rescue more difficult, before returning him to Berkeley Castle in September. Some commentators have claimed that Edward's escape was actually successful, and that someone else was later murdered in his place.

Historical sources record that Edward was murdered there on 21 September 1327.

The account given to Parliament at the time was that Edward had met with a fatal accident, but Holinshed and other historical sources record that great effort was made to keep the murder secret. The body was embalmed and remained lying in state at Berkeley for a month, in the Chapel of St John within the castle keep, before Thomas de Berkeley escorted it to Gloucester Abbey for burial. Thomas was later charged with being an accessory to the murder, but his defence was that it was carried out by the agents of Roger Mortimer while he was away from the castle, and in 1337 he was cleared of all charges. 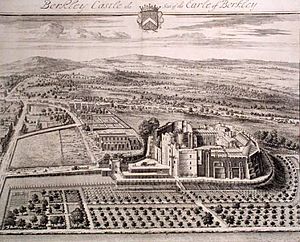 In 1384 Katherine, Lady Berkeley founded a school. This school still exists today. It was unusual to found a school and she was the first people to found a small fully endowed school.

In the 14th century, the Great Hall was given a new roof and it is here the last court jester in England, Dickie Pearce, died after falling from the Minstrels' gallery. His tomb is in St Mary's churchyard which stands besides the castle. Adjoining the Great Hall was the Chapel of St Mary (now the morning room) with its painted wooden vaulted ceilings and a biblical passage, written in Norman French.

A dispute about the ownership of Berkeley Castle between Thomas Talbot, 2nd Viscount Lisle and William Berkeley, 2nd Baron Berkeley lead to the Battle of Nibley Green.

In the late 16th century Queen Elizabeth I visited the castle and played bowls on the bowling green.

During the English Civil War, the castle still held sufficient significance for it to be captured in 1645 by Colonel Thomas Rainsborough for the Parliamentarian side; after a siege that saw cannon being fired at point-blank range from the adjacent church roof of Saint Mary the Virgin, the Royal garrison surrendered. As was usual the walls were left breached after this siege, but the Berkeley family were allowed to retain ownership on condition that they never repaired the damage to the Keep and Outer Bailey; this is still enforced today by the Act of Parliament drawn up at the time. According to the Pevsner Architectural Guides the breach is partially filled by a subsequent 'modern' rebuild, but this only amounts to a low garden wall, to stop people falling 28 feet from the Keep Garden, the original Castle's "motte". 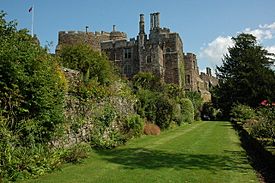 Terrace now turfed and planted as a wall garden 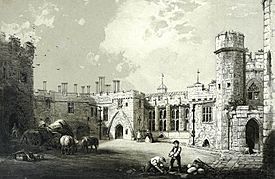 A restoration appeal was launched in 2006 to raise £5.5 million needed to renovate and restore the Norman building. The castle is the third-oldest continuously occupied castle in England, after the royal fortresses of the Tower of London and Windsor Castle, and the oldest to be continuously owned and occupied by the same family. It contains an antique four-poster bed that has been identified as the piece of furniture that has remained the longest in continuous use in the UK by the same family.

The castle was used for many scenes for the 2003 television film of The Other Boleyn Girl. More recently the castle and grounds have been used for the external shots of the Valencian castle in Galavant. In 2019, the castle – both interior and exterior – was used as a filming location for Season 2 of The Spanish Princess.

The castle is featured in an episode of the 2017 season of the genealogy documentary television series Who Do You Think You Are?, with American actress Courteney Cox looking into her ancestry. Cox learns that she is a 21-generation direct descendant of Thomas de Berkeley, 3rd Baron Berkeley and 22-generation descendant of de Berkeley's father-in-law, Roger Mortimer, 1st Earl of March – also learning of their parts in the murder of King Edward II of England at Berkeley Castle in 1327.

Two ships of the Royal Navy have been named Berkeley Castle after the castle, as has a Great Western locomotive.

All content from Kiddle encyclopedia articles (including the article images and facts) can be freely used under Attribution-ShareAlike license, unless stated otherwise. Cite this article:
Berkeley Castle Facts for Kids. Kiddle Encyclopedia.