Berkeley is a small town and parish in Gloucestershire, England. It lies in the Vale of Berkeley between the east bank of the River Severn and the M5 motorway, within the Stroud administrative district. The town is noted for Berkeley Castle, where the imprisoned Edward II was murdered.

Berkeley lies midway between Bristol and Gloucester, on a small hill in the Vale of Berkeley. The town is on the Little Avon River, which flows into the Severn at Berkeley Pill. The Little Avon was tidal, and so navigable, for some distance inland (as far as Berkeley itself and the Sea Mills at Ham) until a 'tidal reservoir' was implemented at Berkeley Pill in the late 1960s. 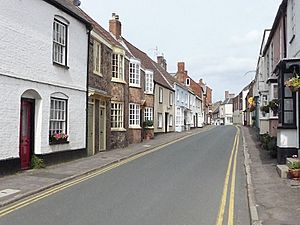 Berkeley was first recorded in 824 as Berclea, from the Old English for "birch lea".

Berkeley was a significant place in medieval times. It was a port and market-town, and the meeting place of the hundred of Berkeley. After the Norman Conquest, a Flemish noble named Roger de Tosny was appointed Provost of the manor of Berkeley by his brother-in-law (or perhaps uncle) Earl William FitzOsbern. His family took the name "de Berkeley", and it was he who began the construction of Berkeley Castle, which was completed by his son, also Roger. A younger son of the elder Roger, John de Berkeley, went north to Scotland with Queen Maud, becoming the progenitor of the Scottish Barclay family.

The parish of Berkeley was the largest in Gloucestershire. It included the tithings of Alkington, Breadstone, Ham, Hamfellow and Hinton, and the chapelry of Stone, which became a separate parish in 1797. Hinton became a separate civil parish, and the separate ecclesiastical parish of Sharpness with Purton, in the 20th century.

Berkeley was also the site of Berkeley nuclear power station, which has two Magnox nuclear reactors. This power station, the first commercial British reactor to enter operation, has since been decommissioned and all that remains are the two reactors encased in concrete. The administrative centre adjacent to the station is still active however – the centre was founded as Berkeley Nuclear Laboratories in the early 1960s and was one of the three principal research laboratories of the CEGB.

A local legend tells that the town was once home to the Witch of Berkeley, who sold her soul to the Devil in exchange for wealth. It is said that, despite taking refuge in the church, the Devil carried her off on a black horse covered with spikes. 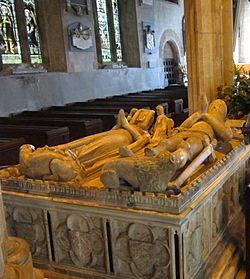 From 1876 to 1964 the town had a railway station, originally on a branch from a junction at Berkeley Road on the Bristol and Gloucester Railway. From 1879 the branch became a through-route to Lydney when the Severn Railway Bridge was opened. However, the bridge was damaged beyond repair by a ship collision in 1960. Nearest station is now Cam and Dursley (5 miles). There are also several bus services running to and from the town.

All content from Kiddle encyclopedia articles (including the article images and facts) can be freely used under Attribution-ShareAlike license, unless stated otherwise. Cite this article:
Berkeley, Gloucestershire Facts for Kids. Kiddle Encyclopedia.