The Afsharid dynasty were members of an Iranian dynasty that originated from the Turkic Afshar tribe in Iran's north-eastern province of Khorasan, ruling Persia in the mid-eighteenth century. The dynasty was founded in 1736 by the brilliant military commander Nader Shah, who became the great Shah of Iran.

During Nader's reign, Iran reached its greatest heights since the Sassanid Empire. At its height it controlled modern-day Iran, Armenia, Georgia, Azerbaijan, parts of the North Caucasus (Dagestan), Afghanistan, Bahrain, Turkmenistan, Uzbekistan and Pakistan, and parts of Iraq, Turkey and Oman.

After his death, most of his empire was divided between the Zands, Durranis, Georgians, and the Caucasian khanates, while Afsharid rule was confined to a small local state in Khorasan. Finally, the Afsharid dynasty was overthrown by Mohammad Khan Qajar in 1796, who would establish a new native Iranian empire and restore Iranian policy over several of the aforementioned regions.

The dynasty was named after the Turkic Afshar tribe to which Nader belonged. The Afshars had migrated from Turkestan to Azerbaijan in the 13th century. In the early 17th century, Shah Abbas the Great moved many Afshars from Azerbaijan to Khorasan to defend the north-eastern borders of his state against the Uzbeks. Nader belonged to the Qereqlu branch of the Afshars.

Foundation of the dynasty 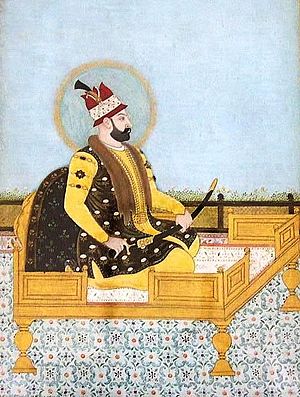 Nader Shah was born (as Nader Qoli) into a humble semi-nomadic family of an Afshar tribe of Khorasan, where he became a local warlord. His path to power began when the Ghilzai Shah Mahmud overthrew the weak Safavid shah Sultan Husayn in 1722. At the same time, Ottoman and Russian forces seized Persian land. Nader joined forces with Sultan Husayn's son Tahmasp II and led the resistance against the Ghilzai Afghans, driving their leader Ashraf Khan out of the capital in 1729 and establishing Tahmasp on the throne.

Nader fought to regain the lands lost to the Ottomans and restore Persian control of the Afghans. While he was away in the east fighting the Ghilzais, Tahmasp allowed the Ottomans to retake territory in the west. Nader, disgusted, had Tahmasp deposed in favour of his baby son Abbas III in 1732. Four years later, after he had recaptured most of the lost Persian lands, Nader was confident enough to have himself proclaimed Shah in his own right at a ceremony on the Moghan Plain.

All content from Kiddle encyclopedia articles (including the article images and facts) can be freely used under Attribution-ShareAlike license, unless stated otherwise. Cite this article:
Afsharid dynasty Facts for Kids. Kiddle Encyclopedia.