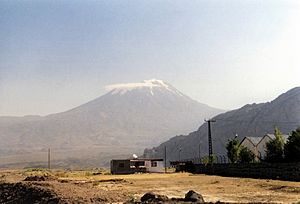 The Armenian Highland (also known as the Armenian Upland or Armenian Plateau) is part of the Transcaucasian Highland and constitutes the continuation of the Caucasus mountains, also referred as eastern Armenia.

The apricot is native to China and spread to Europe through the Armenia Highlands. It came to be known throughout the ancient world as the Armenian fruit. Its botanical name Prunus armeniaca, derives from the Latin vernacular for apricot, armeniacum, which some scholars have linked to its Akkadian name armanu.

Many scholars place the Indo-European homeland in the Armenian Highlands and the plateau of Asia Minor to the southwest. Others believe that it was in Eastern Europe or southern Russia.

Some scholars believe, for example, that the earliest mention of the Armenians is in the Akkadian inscriptions dating to the 28th-27th centuries BC, in which the Armenians are referred to as the sons of Haya, after the regional god of the Armenian Highlands.

All content from Kiddle encyclopedia articles (including the article images and facts) can be freely used under Attribution-ShareAlike license, unless stated otherwise. Cite this article:
Armenian Highland Facts for Kids. Kiddle Encyclopedia.