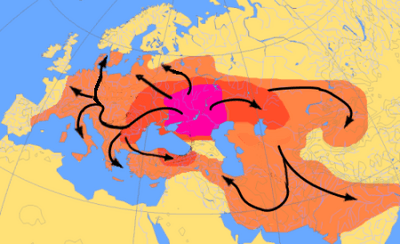 Knowledge of them comes not only from language, but also from archaeology and archaeogenetics. They were a group of loosely related peoples ancestral to the Bronze Age Indo-Europeans.

The Proto-Indo-Europeans likely lived during the Copper Age, or roughly the 5th to 4th millennia BC. Mainstream scholarship places them in the general region of the steppes in Eastern Europe and Central Asia. Some scholars would extend the time of PIE much further back.

By the mid-2nd millennium BC offshoots of the Proto-Indo-Europeans had reached Anatolia, the Aegean, Northern India, and likely Western Europe.

The Proto-Indo-European culture had some or all of these features:

The Proto-Indo-Europeans were a patrilineal society, probably half-nomadic, relying on animal husbandry, notably of cattle and sheep. They domesticated the horse – ekwos (cf. Latin equus). The cow (gwous) played a central role, in religion and mythology as well as in daily life. A man's wealth would have been measured by the number of his animals (small livestock), peḱus (cf. English fee, Latin pecunia).

They practiced a polytheistic religion centered on sacrificial rites, probably administered by a priestly caste. Burials in barrows or tomb chambers (see Kurgan hypothesis). Important leaders would have been buried with their belongings, and possibly also with members of their households or wives (human sacrifice, suttee).

Many Indo-European societies know a threefold division of priests, a warrior class, and a class of peasants or husbandmen. If there was a separate class of warriors, it probably consisted of single young men. They would have followed a separate warrior code unacceptable in the society outside their peer-group. Traces of initiation rites in several Indo-European societies suggest that this group identified itself with wolves or dogs (see also Berserker, werewolf).

As for technology, reconstruction suggests a culture of the early Bronze Age, with bronze tools and weapons. Silver and gold were known. Sheep were kept for wool, and textiles were woven. The wheel was known, certainly for ox-drawn carts, and late Proto-Indo European warfare may also have made use of horse-drawn chariots.

The native name of this people cannot be reconstructed with certainty. Aryo- (interpreted by some as meaning "those who plow"), sometimes upheld as a self-identification of the Proto-Indo-Europeans (see Aryan), is shown only in the Indo-Iranian subfamily, since it appears on written inscriptions; however, the Proto-Indo-Europeans themselves had not yet adopted writing, so there is no way to verify that Aryo- was their self-identification.

All content from Kiddle encyclopedia articles (including the article images and facts) can be freely used under Attribution-ShareAlike license, unless stated otherwise. Cite this article:
Proto-Indo-Europeans Facts for Kids. Kiddle Encyclopedia.