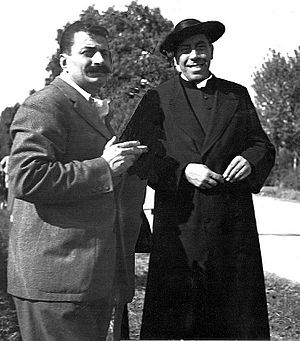 Fernand Joseph Désiré Contandin was a French actor and singer. He is usually called Fernandel.

He was born on 8 May 1903 in Marseille, France. He acted in comedies for vaudeville and operettas. He was best known for his role in the Don Camillo series of motion pictures. His first Hollywood movie was Around the World in Eighty Days.

Fernandel died 26 February 1971 from lung cancer. He is buried in the Cimetière de Passy, Paris, France. 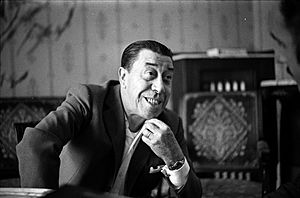 Fernandel giving an interview in March 1970.

All content from Kiddle encyclopedia articles (including the article images and facts) can be freely used under Attribution-ShareAlike license, unless stated otherwise. Cite this article:
Fernandel Facts for Kids. Kiddle Encyclopedia.