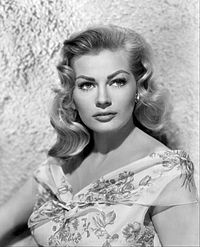 Kerstin Anita Marianne Ekberg (29 September 1931 – 11 January 2015) was a Swedish actress. She was born in Malmö, Skåne. She was best known for her role in the movie La Dolce Vita (1960), which was directed by Federico Fellini.

Ekberg died from a long-illness in Castelli Romani, Italy, aged 83.

All content from Kiddle encyclopedia articles (including the article images and facts) can be freely used under Attribution-ShareAlike license, unless stated otherwise. Cite this article:
Anita Ekberg Facts for Kids. Kiddle Encyclopedia.