Monica Anna Maria Bellucci (Italian: [ˈmɔːnika belˈluttʃi]; born 30 September 1964) is an Italian actress and model. She began her career as a fashion model, modelling for Dolce & Gabbana and Dior, before making a transition to Italian films and later American and French films.

She made her film debut in Francesco Laudadio's Italian comedy La Riffa (1991). The following year she played a Bride of Dracula in Francis Ford Coppola's gothic horror romance film Bram Stoker's Dracula (1992). For her leading role in L'Appartement (1997), she received a César Award for Most Promising Actress. She played Malèna Scordia in the Giuseppe Tornatore's acclaimed Italian romantic drama Malèna (2000). She starred in Gaspar Noé's controversial arthouse psychological thriller film Irréversible (2002), which premiered at the Cannes Film Festival.

Bellucci was born 30 September 1964 in Città di Castello, Umbria, the only child of Brunella Briganti and Pasquale Bellucci, and grew up in Lama of San Giustino. 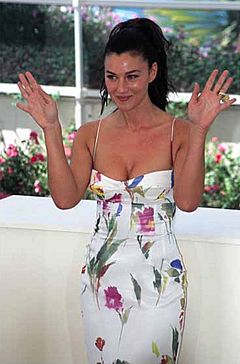 Monica Bellucci began modelling at age 13 by posing for a local photo enthusiast. In 1988, Bellucci left the Faculty of Law at the University of Perugia, and moved to one of Europe's fashion centers, Milan, where she signed with Elite Model Management with the aid of model agent Piero Piazzi. By 1989, she was becoming prominent as a fashion model in Paris and across the Atlantic, in New York City. She posed for Dolce & Gabbana and French Elle, among others. In that year, Bellucci made the transition to acting and began taking acting classes. The February 2001 Esquire's feature on Desire featured Bellucci on the cover and in an article on the five senses.

In 2012, she became the new face of Dolce & Gabbana. She is managed by Elite+ in New York City. Bellucci is signed to D'management Group in Milan and also to Storm Management in London. Bellucci also posed for GQ Italia in February 2016.

Bellucci walked the runway for the Spring 2019 Milan Fashion Week for Dolce and Gabbana. Joining her included Isabella Rossellini, Eva Herzigová and Helena Christensen, continuing the influx of 90s supermodels returning to the spotlight of fashion. 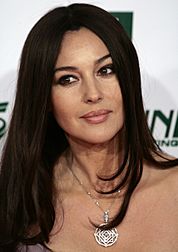 Bellucci's film career began in the early 1990s. She played some minor roles in La Riffa (1991) and Bram Stoker's Dracula (1992). In 1996, she was nominated for a César Award for best supporting actress for her portrayal of Lisa in The Apartment and strengthened her position as an actress. She became known and popular with worldwide audiences, following her roles in Malèna (2000), Brotherhood of the Wolf (2001) and Irréversible (2002).

She also voiced Kaileena in the video game Prince of Persia: Warrior Within and the French voice of Cappy for the French version of the 2005 animated film Robots. She was supposed to be seen portraying Indian politician Sonia Gandhi in the biopic Sonia, originally planned for release in 2007, but it has been shelved. Bellucci dubbed her own voice for the French and Italian releases of the film Shoot 'Em Up (2007).

In 2011, Bellucci was ranked fourth in Los Angeles Times Magazine's list of the 50 most beautiful women in film.

At 50, she became the oldest Bond girl ever in the James Bond film franchise, playing Lucia Sciarra in Spectre (2015). Three years later, she appeared in the Australian film Nekrotronic.

In 2021 she was honoured with Stella Della Mole Award for Artistic Innovation at 39th Torino Film Festival considering her lifetime achievements.

At the age of 20, Bellucci married Italian photographer Claudio Carlos Basso; they divorced after six months.

From 1989 to 1995, she had a relationship with Italian actor Nicola Farron.

She met French actor Vincent Cassel on the set of their 1996 film The Apartment. They married on 2 August 1999 in Monaco. Bellucci and Cassel have two daughters, Deva (born 12 September 2004) and Léonie (born 21 May 2010). Their daughters were born in Rome. Bellucci and Cassel acted together in nine films from 1996 to 2006. The couple announced their separation on 26 August 2013 and later divorced. At the end of 2014, Bellucci said she was still enamoured of Cassel; both have remained close ever since.

After her divorce, Bellucci was in a relationship with French sculptor and former model Nicolas Lefebvre, who was then 37 years old. They made it official in early March 2019 during a Chanel show at the Grand Palais in Paris. She announced the end of their relationship in early July 2019.

Bellucci lived with Cassel and their daughters in Italy, France, Brazil, and England. Then, in 2015, she decided to settle in Paris. Bellucci says, "Paris is part of my history", but she nevertheless considers herself "completely Italian. Everything in me is Italian." She has houses in Lisbon and Rome. During the coronavirus lockdowns, Bellucci and Cassel lived in two nearby houses on the Basque coast (Pyrénées-Atlantiques) so that the latter could see his daughters and thus continue to share parental duties.

Bellucci is fluent in Italian, French, and English. Deva became Dolce & Gabbana's muse at the age of 15 and, later, their runway model. Her daughters' native language is Italian; Deva spoke five languages ​​at the age of 16.

In the documentary movie The Big Question, about the film The Passion of the Christ, Bellucci stated: "I am an agnostic, even though I respect and am interested in all religions. If there's something I believe in, it's a mysterious energy; the one that fills the oceans during tides, the one that unites nature and beings." 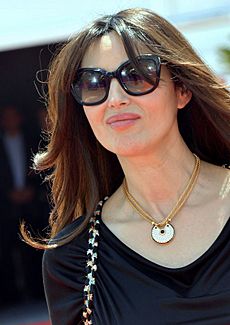 Bellucci at the 2017 Cannes Film Festival

All content from Kiddle encyclopedia articles (including the article images and facts) can be freely used under Attribution-ShareAlike license, unless stated otherwise. Cite this article:
Monica Bellucci Facts for Kids. Kiddle Encyclopedia.