The Institut polytechnique des sciences avancées, often called IPSA, is a private aeronautical university localized next to Paris and Toulouse in France, in the Île-de-France and Midi-Pyrénées, The university is part of IONIS Education Group and was created in 1961.

IPSA was founded in 1961 in Paris by Michel Cazin (private secretary to Louis de Broglie and teacher at the mechanical department of Conservatoire national des arts et métiers), Maurice Pradier (aerospace engineer) and Paul Lefort (engineer and professor of helicopter). Twenty students started the training. At that time, the course was in four years and the first promotion is graduated in 1965. The same year, the Alumni association is created in Paris by Maurice Ribonnet. In 1982, the first trip for students is organized in Guyana at the European Space Agency center. The year 1987 saw the university bought by Henri Hertert (IPSA 1976 and pilot at Air France). The institute moved in 1989 into the towers Les Mercuriales at Bagnolet, in which it stayed for ten years. Then, beset by financial difficulties, the university is bought by IONIS Education Group in 1999 and moved at Le Kremlin-Bicêtre close to the university EPITA.

In 2005, the Master issued by IPSA is recognized by French State at the higher level, after accreditation by the Commission nationale de la certification professionnelle. The year 2006 sees the institute hosting the 6th European Congress of the Mars Society to promote the exploration of Mars. In 2007, IPSA opens a second campus in Toulouse, joins the Erasmus programme and concludes double degree agreements with foreign universities. Following its establishment in Toulouse, the university joins the Institut au service du spatial, de ses applications et technologies during the year 2008. The next year, IPSA joins Aerospace Valley and moved in Ivry-sur-Seine close to the university ESME-Sudria, before being recognized by the French State in 2010.

In 2011, the university is accredited by the Commission des titres d'ingénieur. In January 2013, IPSA became member of the Conférence des directeurs des écoles françaises d'ingénieurs.

The current director is Hervé Renaudeau, who was director of ESTACA university from 2007 to 2009. This is the seventh person to hold that function since 1961. He was appointed director of IPSA in September 2009.

IPSA wants to be close to other universities with a strong theoretical training for research and development jobs in order to graduate engineer in aeronautical and space engineering with a good general knowledge in aerospace. The course is in five years with five possibilities in the fourth year: "energy, spacecraft propulsion and engine", "mechanics and aircraft structure", "telecommunications, radar and radio navigation", "embedded system", "mechatronics". The students choose also one minor from ten: "Entrepreneurship", "business marketing", "association management", "Research Management", "Conduct of an international project", "project personnel development", "Board and consulting", " human resource management", "cultural management", "financial management".

In the fifth year, four options are available independently of the choice made in the fourth year: "Avionics", "Aeronautical Systems Design", " Space Systems Design" and "Management and Industrial Logistics".

The particularity of the university is to offer from the first year lessons relating to aeronautics in addition to basic scientific education and to provide a large part in project-based teaching throughout the curriculum. Students also have the opportunity to attend a technical and managerial course sanctioned by a Master of Business Administration in "business and international negotiation" of the Institut supérieur de gestion in addition to the diploma of the university, or to make the last year of studies in a foreign university in partnership with IPSA. Eleven months of internship are planned in the curriculum.

After graduation, graduates are represented by the association AAEIPSA (IPSA Alumni association). They work, for 70% of them, in the aerospace industry, mainly in research and development (46%) and in the Île-de-France region (57%).

Admission to the university is possible after a Baccalauréat by succeeding to the competition "Advance" organized in partnership with EPITA and ESME-Sudria. In total, the three universities offer approximately 900 places. It is also possible to integrate the university in the second, third or fourth year studies for students coming from a two-years degree after the Baccalauréat, Bachelor or Master. 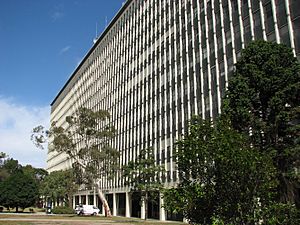 Students can also use the Erasmus programme.

Research at IPSA is realized in 2011 by three laboratories : 3D computer graphics - calculation, mechatronics and fluid mechanics applied to aerodynamics.

The laboratory of 3D computer graphics and calculation creating new algorithms to solve problems of processing and analysis of signals and images. It works in partnership with the laboratoire des signaux et systèmes (L2S) (signals and systems laboratory) (agreement signed in 2010), a laboratory of the French National Centre for Scientific Research based at Supélec.

IPS'action association has launched in 2006 the « UNIV'air » challenge in order to present to people research projects in partnership with the Association Aéronautique et Astronautique de France and other universities such as the École nationale supérieure de l'aéronautique et de l'espace or EPF.

In 2008, an aircraft without pilot project named « Hélitronix » and realized by students and researchers of the mechatronics laboratory was selected during the « Minidrone » challenge funded by the General Directorate for Armament and organized by the Office National d'Études et de Recherches Aérospatiales. The same laboratory works on the « Perseus project » which consists of the development of rockets from the Centre national d'études spatiales, in partnership with « AéroIPSA » student association.

Moreover, IPSA participates to « ASTech Paris Région ». It contributes at its development in many sectors : aircraft engine, onboard energy, aircraft design, material, training and research, and maintenance.

In November 2011, the fluid mechanics applied to aerodynamics laboratory created in 2009 has adopted a new calculation tool allowing for the end of 2011 the commissioning of a digital wind tunnel.

All content from Kiddle encyclopedia articles (including the article images and facts) can be freely used under Attribution-ShareAlike license, unless stated otherwise. Cite this article:
Institut Polytechnique des Sciences Avancées Facts for Kids. Kiddle Encyclopedia.