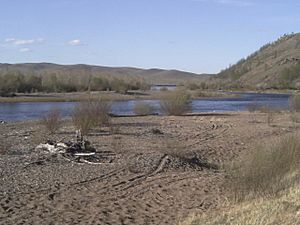 The Onon gol (Mongolian: Онон гол, Russian: Онон) is a river in Mongolia and Russia. It is 818 km long. Its watershed is 94,010 km2. It starts at the Khentii Mountains, on the Eastern slopes. 298 km of the river is in Mongolia. It has a confluence (the place where two rivers join together) with the Ingoda River. When they meet, it makes the Shilka River. People believe that Genghis Khan was born near the upper Onon and he grew up there. The rivers Onon—Shilka—Amur makes one of the world's ten longest rivers (their lengths, in order: 818 km, 560 km, 2,874 km).

All content from Kiddle encyclopedia articles (including the article images and facts) can be freely used under Attribution-ShareAlike license, unless stated otherwise. Cite this article:
Onon River Facts for Kids. Kiddle Encyclopedia.