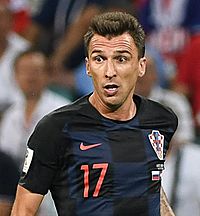 Mandžukić at the 2018 FIFA World Cup.

Mario Mandžukić (born 21 May 1986) is a Croatian football player that plays for AC Milan and the Croatian national team. He was the UEFA Euro 2012 co-top scorer, and he was named the Croatian Footballer of the Year in 2012 and 2013.

He was born in Slavonski Brod, in Yugoslavia. His family moved to Germany as refugees because of the Croatian War of Independence.

All content from Kiddle encyclopedia articles (including the article images and facts) can be freely used under Attribution-ShareAlike license, unless stated otherwise. Cite this article:
Mario Mandžukić Facts for Kids. Kiddle Encyclopedia.