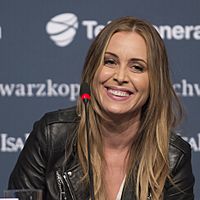 Anouk Teeuwe (Dutch pronunciation: [aːˈnuk ˈteːuʋə]; born 8 April 1975), professionally known by the mononym Anouk, is a Dutch singer-songwriter and record producer. After her breakthrough in 1997 with the single "Nobody's Wife", she had hit singles in the Dutch and Belgian charts. Her songs include "R U Kiddin' Me", "Michel", "Girl", "Lost", "Modern World", "Three Days in a Row", and "Woman".

All content from Kiddle encyclopedia articles (including the article images and facts) can be freely used under Attribution-ShareAlike license, unless stated otherwise. Cite this article:
Anouk (singer) Facts for Kids. Kiddle Encyclopedia.