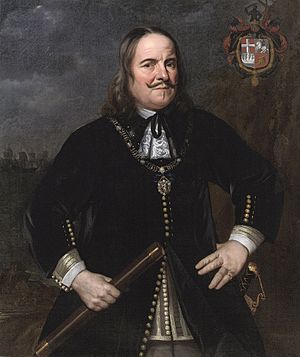 De Ruyter was born in Vlissingen. He fought the English in the three Anglo-Dutch Wars and scored several huge victories. He won amongst others the Four Days Battle and the Raid on Medway, close to London, the English capital. He also fought battles against Sweden and France. He died because of injuries he got on a battle against France, he is buried in Amsterdam.

All content from Kiddle encyclopedia articles (including the article images and facts) can be freely used under Attribution-ShareAlike license, unless stated otherwise. Cite this article:
Michiel de Ruyter Facts for Kids. Kiddle Encyclopedia.