Low Saxon and its dialects 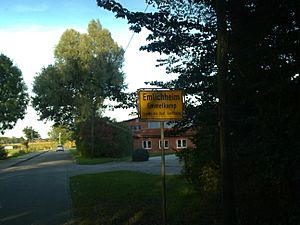 Plattdüütsch is a Germanic language. It is known in English as Low Saxon or Low German, or as in German, Plattdeutsch.

Estimates are that there are 3 to 10 million speakers. Most of them have a passive knowledge of the language; there may be about 3 million people who speak it at a good to very good level (or who are native speakers).

The European Charter for Regional or Minority Languages gives some official recognition and protection to Plattdüütsch as a Regional language in Germany and the Netherlands. In Germany it has the protection of the rules in part III of the Charter in the states of Bremen, Hamburg, Mecklenburg-Western Pomerania, Lower Saxony and Schleswig-Holstein, and the protection of part III of the charter in Brandenburg, North Rhine-Westphalia and Saxony-Anhalt. It has part II protection in the Netherlands.

Some people say that Plattdüütsch is not really a language at all. But the European Charter does not apply to dialects, only to languages, and so the German government must think that the language is not just a dialect of German.

Mennonite communities use their Plautdietsch everywhere they live, especially in Russia, Ukraine, Central Asia, Germany, South Africa, Malaysia, Indonesia, Australia and the Americas (i.e. the Mennonite colonies in Paraguay, South America, or Chihuahua, Mexico, use Low German as a "co-official language" of the community, in addition to the country's official language, Spanish). There are communities in the Midwest of the United States, some of them with their own dialects that developed from dialects imported from Schleswig-Holstein and Lower Saxony in the 19th century. Nobody knows how many people speak Low German in the United States, and the language may have died out in the mid 20th century, as the many German-American communities were further assimilated (mixed) into the English speaking United States and lost many of their traditions, including using Low German and other German dialects/languages.

All content from Kiddle encyclopedia articles (including the article images and facts) can be freely used under Attribution-ShareAlike license, unless stated otherwise. Cite this article:
Low Saxon Facts for Kids. Kiddle Encyclopedia.