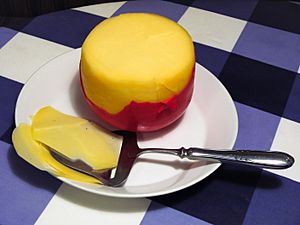 Edam is a type of Dutch cheese. It is named after the town that it comes from, Edam in the Netherlands. Edam cheese is pale yellow. It is often sold in round pieces, covered in red paraffin wax. Edam that is sold in the Netherlands (and not exported) does not usually have wax on it. 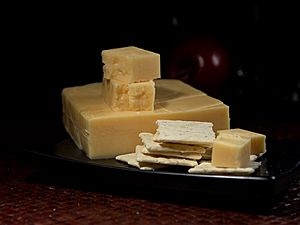 Most "young" Edam cheese sold in stores has a very mild flavor, slightly salty or nutty, and almost no smell when compared to other cheeses. As the cheese ages, its flavor sharpens, and it becomes firmer. It has a significantly lower fat content than many other traditional cheeses; Edam may have as little as 28% fat in dry matter. Modern Edam is softer than other cheeses, such as Cheddar, due to its low fat content. However, it is not quite as suitable for toasting as are certain other cheeses, such as Cheddar.

Mild Edam goes well with fruit such as peaches, melons, apricots, and cherries. Aged Edam is often eaten with traditional "cheese fruits" like pears and apples. Like most cheeses, it is commonly eaten on crackers and bread, and may be eaten with crackers following the main course of a meal as a dessert of "cheese and biscuits". Pinot gris, dry Riesling, semidry Riesling, Champagne, Chardonnay, and Shiraz/Syrah are some recommended wines to accompany this cheese. 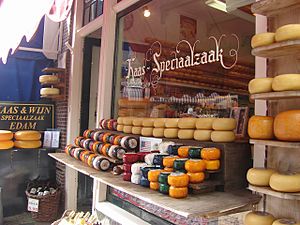 Shop with an assortment of Edam cheeses

Edam cheese is popular in North America, the Nordic countries, and many other countries around the world.

In the Maghreb region, it is commonly known as red cheese.

All content from Kiddle encyclopedia articles (including the article images and facts) can be freely used under Attribution-ShareAlike license, unless stated otherwise. Cite this article:
Edam cheese Facts for Kids. Kiddle Encyclopedia.