Kids Encyclopedia Facts
(Redirected from Visible light)
"Visible light" redirects here. For all parts of the electromagnetic spectrum that can be seen by the eye, see Visible spectrum. 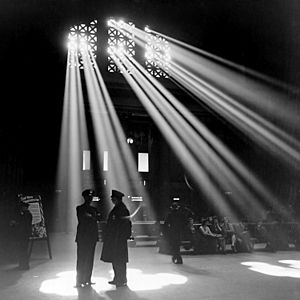 Rays of light shine through metal patterns into a railway station

Light is a type of energy. It is a form of electromagnetic radiation of a wavelength which can be detected by the human eye. It is a small part of the electromagnetic spectrum and radiation given off by stars like the sun. Animals can also see light. Light exists in tiny packets called photons. It shows properties of both waves and particles. The study of light, known as optics, is an important research area in modern physics.

Light is electromagnetic radiation that is in the form of a wave. Each wave has a wavelength or frequency. The human eye sees each wavelength as a different color. Rainbows show the entire spectrum of visible light. The separate colors, moving in from the outer edges, are usually listed as red, orange, yellow, green, blue, indigo and violet. Other colors can be seen only with special cameras or instruments: Wavelengths below the frequency of red are called infrared, and higher than of violet are called ultraviolet.

The other main properties of light are intensity, polarization, phase and orbital angular momentum.

In a vacuum, light moves at the speed of light; which is 299,792,458 meters, or about 186,282 miles per second. This means it takes about 8 minutes for light to reach Earth from the Sun. In glass it travels at about two-thirds as fast.

Light moves in a straight line, creating shadows when the path of light is blocked. More solid things will have a darker shadow, things that are more clear have a lighter shadow, and transparent things will have none or very little shadow. Light can pass through transparent things the most easily. When light is not in a vacuum, it travels more slowly than its maximum speed of light. The slowest light ever recorded moved at 38 mph. Our eyes react to light; when we see something we see the light it reflects, or the light it emits. For example, a lamp gives off light, and everything else in the same room as the lamp reflects its light.

Every color of light has a different wavelength. The shorter the wavelength, the more energy the light has. The speed at which light moves does not depend on its energy. Going through partly clear objects can slow light down by a very small amount.

When light is refracted in raindrops, a rainbow is made. The raindrop acts like a prism and refracts the light until we can see the colors of the spectrum. 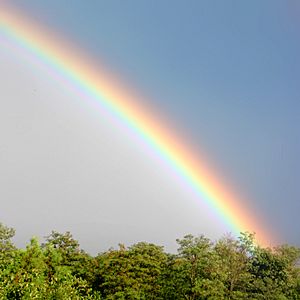 Rainbow in Budapest shows the colors of the visible spectrum

Light and color are forms of analog information. However, electronic cameras and computer displays work with digital information. So, electronic cameras or document scanners make a digital version of a color image by separating out the full color image into separate red, green, and blue images. Later, a digital display uses pixels of just those three colors. Computer screens use only these three colors in different brightness levels. The brain combines them to see all of the other colors in the image.

People think of objects as having color. Scientist explain this because the molecules that make up the object absorb certain light waves, leaving the other light waves to bounce off. The human eye sees the wavelengths of all of the light that was not absorbed, and the combination of those leaves the brain with the impression of a color.

Another, more accurate, measurement of the speed of light was performed in Europe by Hippolyte Fizeau in 1849. Fizeau directed a beam of light at a mirror several kilometers away. A rotating cog wheel was placed in the path of the light beam as it traveled from the source, to the mirror and then returned to its origin. Fizeau found that at a certain rate of rotation, the beam would pass through one gap in the wheel on the way out and the next gap on the way back. Knowing the distance to the mirror, the number of teeth on the wheel, and the rate of rotation, Fizeau was able to calculate the speed of light as 313,000,000 m/s.

Léon Foucault carried out an experiment which used rotating mirrors to obtain a value of 298,000,000 m/s in 1862. Albert A. Michelson conducted experiments on the speed of light from 1877 until his death in 1931. He refined Foucault's methods in 1926 using improved rotating mirrors to measure the time it took light to make a round trip from Mount Wilson to Mount San Antonio in California. The precise measurements yielded a speed of 299,796,000 m/s.

The effective velocity of light in various transparent substances containing ordinary matter, is less than in vacuum. For example, the speed of light in water is about 3/4 of that in vacuum.

Two independent teams of physicists were said to bring light to a "complete standstill" by passing it through a Bose–Einstein condensate of the element rubidium, one team at Harvard University and the Rowland Institute for Science in Cambridge, Massachusetts, and the other at the Harvard–Smithsonian Center for Astrophysics, also in Cambridge. However, the popular description of light being "stopped" in these experiments refers only to light being stored in the excited states of atoms, then re-emitted at an arbitrary later time, as stimulated by a second laser pulse. During the time it had "stopped" it had ceased to be light.

The study of light and the interaction of light and matter is termed optics. The observation and study of optical phenomena such as rainbows and the aurora borealis offer many clues as to the nature of light. 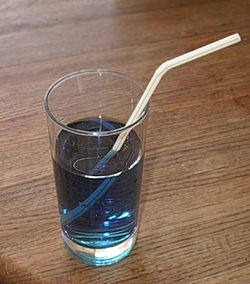 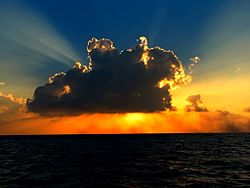 A cloud illuminated by sunlight

Refraction is the bending of light rays when passing through a surface between one transparent material and another.

When a beam of light crosses the boundary between a vacuum and another medium, or between two different media, the wavelength of the light changes, but the frequency remains constant. If the beam of light is not orthogonal (or rather normal) to the boundary, the change in wavelength results in a change in the direction of the beam. This change of direction is known as refraction.

The refractive quality of lenses is frequently used to manipulate light in order to change the apparent size of images. Magnifying glasses, spectacles, contact lenses, microscopes and refracting telescopes are all examples of this manipulation.

There are many sources of light. A body at a given temperature emits a characteristic spectrum of black-body radiation. A simple thermal source is sunlight, the radiation emitted by the chromosphere of the Sun at around 6,000 kelvins (5,730 degrees Celsius; 10,340 degrees Fahrenheit) peaks in the visible region of the electromagnetic spectrum when plotted in wavelength units and roughly 44% of sunlight energy that reaches the ground is visible. Another example is incandescent light bulbs, which emit only around 10% of their energy as visible light and the remainder as infrared. A common thermal light source in history is the glowing solid particles in flames, but these also emit most of their radiation in the infrared, and only a fraction in the visible spectrum.

The peak of the blackbody spectrum is in the deep infrared, at about 10 micrometre wavelength, for relatively cool objects like human beings. As the temperature increases, the peak shifts to shorter wavelengths, producing first a red glow, then a white one, and finally a blue-white colour as the peak moves out of the visible part of the spectrum and into the ultraviolet. These colours can be seen when metal is heated to "red hot" or "white hot". Blue-white thermal emission is not often seen, except in stars (the commonly seen pure-blue colour in a gas flame or a welder's torch is in fact due to molecular emission, notably by CH radicals (emitting a wavelength band around 425 nm, and is not seen in stars or pure thermal radiation).

Atoms emit and absorb light at characteristic energies. This produces "emission lines" in the spectrum of each atom. Emission can be spontaneous, as in light-emitting diodes, gas discharge lamps (such as neon lamps and neon signs, mercury-vapor lamps, etc.), and flames (light from the hot gas itself—so, for example, sodium in a gas flame emits characteristic yellow light). Emission can also be stimulated, as in a laser or a microwave maser.

Deceleration of a free charged particle, such as an electron, can produce visible radiation: cyclotron radiation, synchrotron radiation, and bremsstrahlung radiation are all examples of this. Particles moving through a medium faster than the speed of light in that medium can produce visible Cherenkov radiation. Certain chemicals produce visible radiation by chemoluminescence. In living things, this process is called bioluminescence. For example, fireflies produce light by this means, and boats moving through water can disturb plankton which produce a glowing wake.

Certain substances produce light when they are illuminated by more energetic radiation, a process known as fluorescence. Some substances emit light slowly after excitation by more energetic radiation. This is known as phosphorescence. Phosphorescent materials can also be excited by bombarding them with subatomic particles. Cathodoluminescence is one example. This mechanism is used in cathode ray tube television sets and computer monitors. 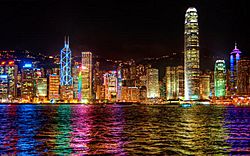 Certain other mechanisms can produce light:

When the concept of light is intended to include very-high-energy photons (gamma rays), additional generation mechanisms include:

All content from Kiddle encyclopedia articles (including the article images and facts) can be freely used under Attribution-ShareAlike license, unless stated otherwise. Cite this article:
Light Facts for Kids. Kiddle Encyclopedia.