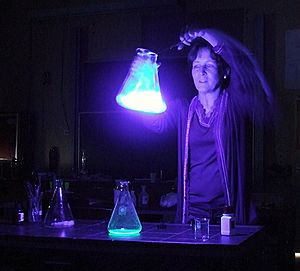 The light made in chemiluminiscence is not directly related to heat. A simple two step example of a reaction of A, and B, that produces; C, D, and light.

C* is an excited state of C.

The amount of measurable light made is called radiant intensity: ICL (photons emitted per second).

The device needed to measure the light made is simple. It needs something to hold the sample, and a photomultiplier tube. There are three ways for this to be used in chemical measurements.

All content from Kiddle encyclopedia articles (including the article images and facts) can be freely used under Attribution-ShareAlike license, unless stated otherwise. Cite this article:
Chemiluminescence Facts for Kids. Kiddle Encyclopedia.