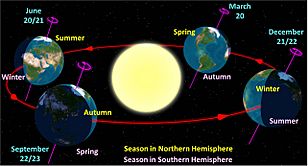 The Earth at different points in its orbit

The Earth's orbit takes about 365 days, this is also called a year. This means that in 365 days (a year) the Earth has gone completely around the Sun. From this we can find that the Earth is actually moving at about 67,000 miles per hour through space.

The closest distance Earth is to the sun, or perihelion, is 146 million km (91 million miles) and the farthest or aphelion is 152 million km (94.5 million miles). It takes light (or any other electromagnetic radiation) just over eight minutes to travel from Sun to Earth.

The seasonal changes on Earth are because of the 23.4 degree axial tilt of its rotation and slightly elliptical path around the Sun.

The orbit varies over long periods of time according to the Milankovitch cycles. These cycles are one of the main causes of climate change.

Because of Earth's axial tilt (often known as the obliquity of the ecliptic), the inclination of the Sun's trajectory in the sky (as seen by an observer on Earth's surface) varies over the course of the year. For an observer at a northern latitude, when the north pole is tilted toward the Sun the day lasts longer and the Sun appears higher in the sky. This results in warmer average temperatures, as additional solar radiation reaches the surface. When the north pole is tilted away from the Sun, the reverse is true and the weather is generally cooler. Above the Arctic Circle and below the Antarctic Circle, an extreme case is reached in which there is no daylight at all for part of the year. This is called a polar night. This variation in the weather (because of the direction of the Earth's axial tilt) results in the seasons.

Events in the orbit

In modern times, Earth's perihelion occurs around January 3, and the aphelion around July 4 (for other eras, see precession and Milankovitch cycles). The changing Earth–Sun distance results in an increase of about 6.9% in total solar energy reaching the Earth at perihelion relative to aphelion. Since the southern hemisphere is tilted toward the Sun at about the same time that the Earth reaches the closest approach to the Sun, the southern hemisphere receives slightly more energy from the Sun than does the northern over the course of a year. However, this effect is much less significant than the total energy change due to the axial tilt, and most of the excess energy is absorbed by the higher proportion of water in the southern hemisphere.

The Hill sphere (gravitational sphere of influence) of the Earth is about 1,500,000 kilometers (0.01 AU) in radius, or approximately 4 times the average distance to the moon. This is the maximal distance at which the Earth's gravitational influence is stronger than the more distant Sun and planets. Objects orbiting the Earth must be within this radius, otherwise they can become unbound by the gravitational perturbation of the Sun.

The following diagram shows the relation between the line of solstice and the line of apsides of Earth's elliptical orbit. The orbital ellipse goes through each of the six Earth images, which are sequentially the perihelion (periapsis — nearest point to the Sun) on anywhere from January 2 to January 5, the point of March equinox on March 19, 20, or 21, the point of June solstice on June 20, 21, or 22, the aphelion (apoapsis — farthest point from the Sun) on anywhere from July 3 to July 5, the September equinox on September 22, 23, or 24, and the December solstice on December 21, 22, or 23. The diagram shows an exaggerated shape of Earth's orbit; the actual orbit is less eccentric than pictured. 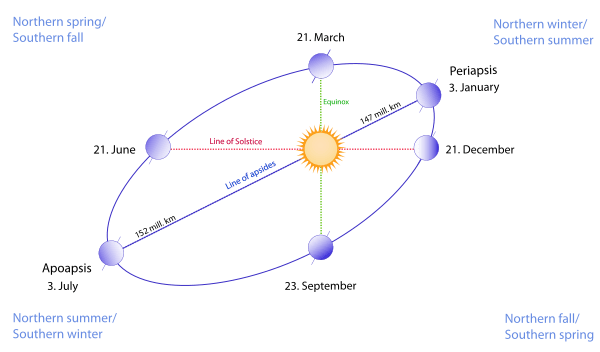 All content from Kiddle encyclopedia articles (including the article images and facts) can be freely used under Attribution-ShareAlike license, unless stated otherwise. Cite this article:
Earth's orbit Facts for Kids. Kiddle Encyclopedia.