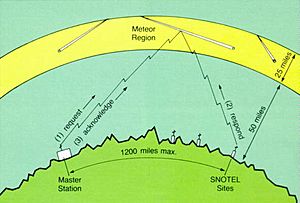 Meteor burst communication uses radio waves which bounce off the ionized trails made by meteors as they enter the earth’s atmosphere. It is also called Meteor scatter communication.

Meteors are lumps of rock which are floating about in space. There are always meteors which are entering the earth’s atmosphere. They normally burn up in the atmosphere. A few very large ones that hit the earth are called 'meteorites'. Most meteors are only tiny specks of dust. As they enter the atmosphere the heat made by air friction rips off electrons. This produces an ionized trail. This trail can reflect radio waves in the same way that a wire would.

The meteors that are used for meteor burst communication are between one thousandth and one hundredth of a gram. Meteors which are smaller than this are too weak to be used. Larger ones are not frequent enough.

The ionized trail can last for several seconds. During this time messages can be sent between two radio communication stations. The messages will be transmitted very fast: about 200 times as fast as with ordinary shortwave radio communication. A teletypewriter may type several lines of text during a meteor burst. The two stations that want to communicate will have to be ready all the time as they never know when the next burst of communication will come. They may have to use several meteor bursts before the whole message is received. The transmitters are often put on buoys in the sea.

Meteor burst communication was first widely used in the 1950s. It was particularly useful for military communications, because a receiver could not tell exactly which direction the message had come from. This was because the message was reflected on the way, so it did not travel in a straight line (i.e. in a simple great circle round the earth’s curve).

All content from Kiddle encyclopedia articles (including the article images and facts) can be freely used under Attribution-ShareAlike license, unless stated otherwise. Cite this article:
Meteor burst communication Facts for Kids. Kiddle Encyclopedia.