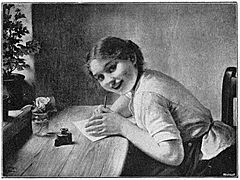 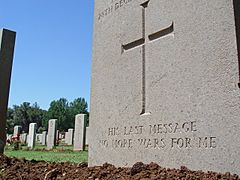 A message is a discrete unit of communication intended by the source for consumption by some recipient or group of recipients. A message may be delivered by various means, including courier, telegraphy, carrier pigeon and electronic bus. A message can be the content of a broadcast. An interactive exchange of messages forms a conversation.

One example of a message is a communiqué, which is a brief report or statement released by a public agency.

In communication between humans, messages can be verbal or nonverbal:

There are two main senses of the word "message" in computing: messages between the human users of computer systems that are delivered by those computer systems, and messages passed between programs or between components of a single program, for their own purposes.

All content from Kiddle encyclopedia articles (including the article images and facts) can be freely used under Attribution-ShareAlike license, unless stated otherwise. Cite this article:
Message Facts for Kids. Kiddle Encyclopedia.