Moons of Mars facts for kids 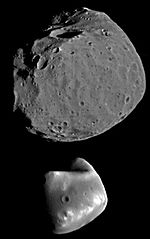 Mars has two little moons, Phobos and Deimos, which are thought to be captured asteroids. They were found by Asaph Hall in 1877.

All content from Kiddle encyclopedia articles (including the article images and facts) can be freely used under Attribution-ShareAlike license, unless stated otherwise. Cite this article:
Moons of Mars Facts for Kids. Kiddle Encyclopedia.