Moons of Haumea facts for kids 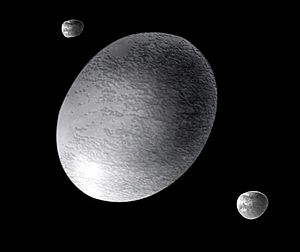 Haumea and the two moons

The moons were formed billions of years ago after something crashed into Haumea and broke apart its layer of ice. Hi'iaka, which is about 350 km in diameter, is the largest and outermost moon, has large amounts of ice on its surface. Namaka, which is only one tenth the size, has a strange orbit, affected by the larger moon.

All content from Kiddle encyclopedia articles (including the article images and facts) can be freely used under Attribution-ShareAlike license, unless stated otherwise. Cite this article:
Moons of Haumea Facts for Kids. Kiddle Encyclopedia.