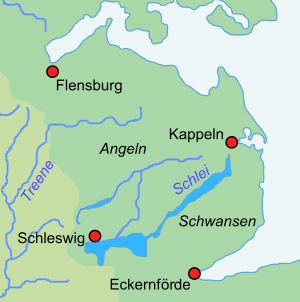 Map of Angeln and Schwansen 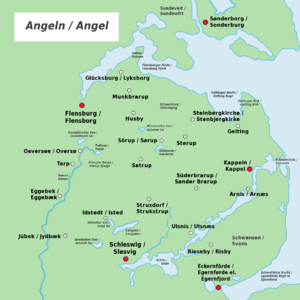 Map of Angeln / Angel - with German and Danish placenames

Modern Angeln, (Danish: Angel; Latin: Anglia, which also means in direct translation from Latin: England), is a peninsula in Schleswig-Holstein, Germany. Ancient Angeln may have been somewhat larger than the Angeln of today, but following the ancient sources it included the territory of modern Angeln.

Angeln has an importance far beyond its small area, as it seems to have been the original home of the Angles who invaded the southern part of Great Britain, which was named after them, England. And so the name of the major world language, English, seems to have taken its name from this little region.

Following the departure of the Angles from Anglia about 350, the region was occupied by Danish settlers not later than the 8th century.

All content from Kiddle encyclopedia articles (including the article images and facts) can be freely used under Attribution-ShareAlike license, unless stated otherwise. Cite this article:
Angeln Facts for Kids. Kiddle Encyclopedia.