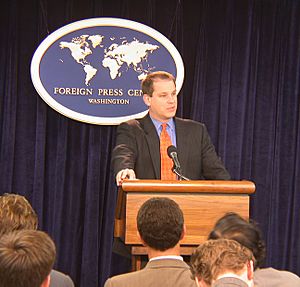 A spokesman (spokesperson or spokeswoman), or spokesmodel is a person who speaks on behalf of others, but is understood not to be necessarily part of the others (e.g. hired to represent the others).

All content from Kiddle encyclopedia articles (including the article images and facts) can be freely used under Attribution-ShareAlike license, unless stated otherwise. Cite this article:
Spokesperson Facts for Kids. Kiddle Encyclopedia.