Efate is an island in the Pacific Ocean which is part of the Shefa Province in The Republic of Vanuatu. It is also known as Île Vate.

It is the most populous (approx. 66,000) island in Vanuatu. Efate's land area of 899.5 square kilometres (347.3 sq mi) makes it Vanuatu's third largest island. Most inhabitants of Efate live in Port Vila, the national capital. Its highest mountain is Mount McDonald with a height of 647 metres (2,123 ft).

Captain James Cook named it Sandwich Island "in honour of my noble patron, the Earl of Sandwich" on his 1774 voyage on the HMS Resolution.

During World War II, Efate served an important role as a United States military base.

On March 13, 2015, Port Vila, the island's largest human settlement and the capital of Vanuatu, bore extensive damage from Cyclone Pam. 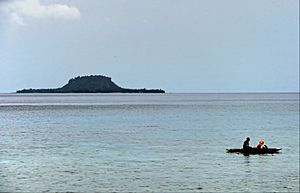 North and west of Efate are small islands called Eratoka (Hat) Island, Lelepa, Nguna, Pele and Emao. Eratoka Island is a small island that, when seen from a distance looks like a floppy hat. This is where the famous Chief Roi Mata, along with his 20 wives, were buried. Nguna, Pele and Emao are stratovolcanoes, which may form the rim of a volcanic caldera to their north. 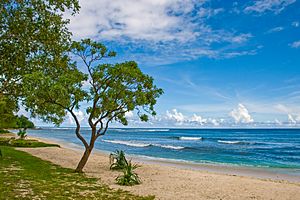 The capital of Port Vila is the hub of tourism in Vanuatu receiving approximately 60 000 tourists annually by air transport, cruise ships and the yachting community. Due to the British and French influence both cuisines are readily available in the capital. Budget dining include the scattered Chinese eateries across Vila and the Mummas Market downtown. Outside of Port Vila a more rustic destination awaits, with most people living a traditional lifestyle: cooking island food or 'aelan kakae', tending their gardens daily as subsistence agriculture is the dominant economy in Vanuatu, and swimming at the beach.

Port Vila services the domestic carrier Air Vanuatu which goes to the outer islands of Vanuatu. Popular destinations such as Tanna and Santo can be reached daily from Port Vila, while more remote locations can be reached on a less regular basis. The island is served by Bauerfield International Airport.

All content from Kiddle encyclopedia articles (including the article images and facts) can be freely used under Attribution-ShareAlike license, unless stated otherwise. Cite this article:
Efate Facts for Kids. Kiddle Encyclopedia.