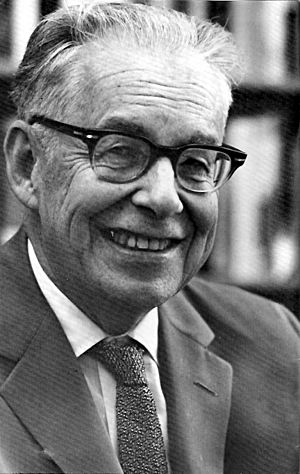 Charles Francis Richter (April 26, 1900 – September 30, 1985) was an American seismologist (someone who studies earthquakes) and a physicist. He is known for creating the Richter scale of magnitude, which says how big an earthquake is.

Richter went to work at the Carnegie Institute in 1927 after Robert Millikan offered him a position as a research assistant there, where he began a collaboration with Beno Gutenberg. The Seismology Lab at the California Institute of Technology wanted to begin publishing regular reports on earthquakes in southern California and had a pressing need for a system of measuring the strength of earthquakes for these reports. Together, Richter and Gutenberg devised the scale that would become known at the Richter scale to fill this need, based on measuring quantitatively the displacement of the earth by seismic waves, as Kiyoo Wadati had suggested.

All content from Kiddle encyclopedia articles (including the article images and facts) can be freely used under Attribution-ShareAlike license, unless stated otherwise. Cite this article:
Charles Richter Facts for Kids. Kiddle Encyclopedia.