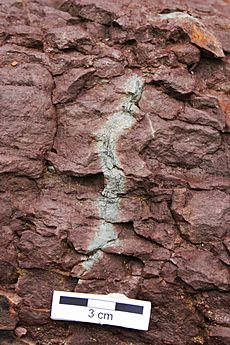 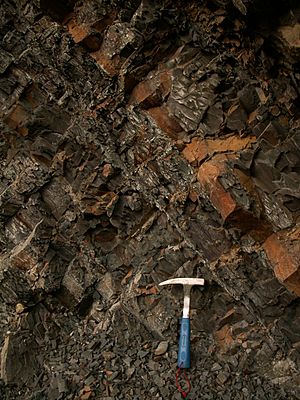 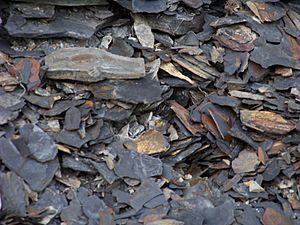 The types of mudrocks include: siltstone, claystone, mudstone, slate, and shale.

Most of the particles are less than 0.0625 mm (1/16th mm or 0.0025 inches) and are too small to study readily in the field. At first sight the rock types look quite similar; however, there are important differences in composition and naming.

There has been a great deal of disagreement about the classification of mudrocks. There are some reasons for this:

Mudrocks make up half of the sedimentary rocks in the geologic record, and are easily the most widespread deposits on Earth. Fine sediment is the most abundant product of erosion, which is why mudrocks are so common.

With increased pressure over time the platey clay minerals may become aligned, with the appearance of parallel layering (fissility). This finely bedded material which splits readily into thin layers is called shale, as distinct from mudstone.

From the beginning of civilization, when pottery and mudbricks were made by hand, to now, mudrocks have been important. The first book on mudrocks was not published until 1964. However, scientists, engineers, and oil producers have understood the significance of mudrocks since the discovery of the Burgess Shale and the relatedness of mudrocks and oil.

All content from Kiddle encyclopedia articles (including the article images and facts) can be freely used under Attribution-ShareAlike license, unless stated otherwise. Cite this article:
Mudrock Facts for Kids. Kiddle Encyclopedia.