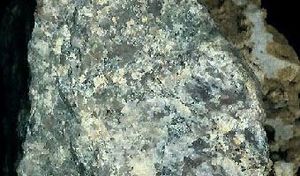 Arkose is a kind of sandstone which is rich in the mineral feldspar. It is made mostly of quartz, but also has at least 25% feldspar. It may also consist of fragments (bits) of rock. Arkose usually contains small amounts of calcite cement, which may also contain iron oxide. Arkose is normally grey to reddish in colour. The sand grains making up arkose are usually coarse.

Arkose is generally formed from the weathering of igneous or metamorphic rocks. These are usually granite rocks, which contain a lot of feldspar and quartz. Arkose is often found with conglomerate deposits where the sediment is made of granite. The central Australian monolith Uluru is made of late Neoproterozoic/Cambrian arkose, deposited by the erosion of a granite-based mountain range.

All content from Kiddle encyclopedia articles (including the article images and facts) can be freely used under Attribution-ShareAlike license, unless stated otherwise. Cite this article:
Arkose Facts for Kids. Kiddle Encyclopedia.