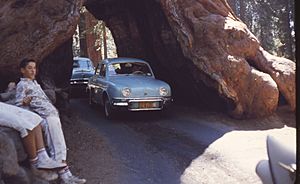 The Wawona Tree, also known as the Wawona Tunnel Tree, was a famous giant sequoia that stood in Mariposa Grove, Yosemite National Park, California, USA, until February 1969. It had a height of 227 feet (69 m) and was 26 feet (7.9 m) in diameter at the base.

The origin of the word Wawona is not known. A popular story claims Wawō'na was the Miwok word for "big tree", or for "hoot of the owl". Birds are considered the sequoia trees' spiritual guardian. 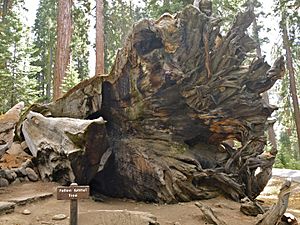 A tunnel was cut through the tree in 1881, enlarging an existing fire scar. Two men, the Scribner brothers, were paid $75 for the job (equivalent to $1,651 in 2018). The tree had a slight lean, which increased when the tunnel was completed. Created by the Yosemite Stage and Turnpike Company as a tourist attraction, this human-made tunnel became immensely popular. Visitors were often photographed driving through or standing in the tunnel.

Construction of the Wawona Tree was part of an effort by the Park Service to increase tourism in the age of the automobile. Stephen Mather, the first Director of the National Park Service, was a main supporter of building a tourist clientele for the parks, which would in turn attract increasing appropriations from Congress and establish the Park Service as a legitimate and noteworthy bureaucratic agency. Mather and his chief aide, Horace Albright, who would also be his successor, worked to make the parks as accessible as possible and, with drive-through attractions such as the Tunnel Tree, as memorable as possible. Mather and Albright had already worked on the "See America First" campaign, trying to connect with western railroads to increase visitation to the parks. In the 1920s, the Park Service actively promoted automobile tourism. Roads and roadside attractions bloomed on the sites of Yellowstone, the Grand Canyon, and Yosemite. Roads, they believed, would also increase accessibility for "those who are not as strong and agile as you and I, for they too are entitled to their inspiration and enjoyment," as Albright stated in a 1931 letter about roads in the Smokies. Around this time, the term 'scenic drive' became introduced into the national vocabulary. The Wawona Tree may also have served as the inspiration for the 1946 children's book, Big Tree, by Mary and Conrad Buff.

The Wawona Tree fell in February 1969 under a heavy load of snow on its crown. The giant sequoia is estimated to have been 2,300 years old. When the giant tree fell, there was much debate over what to do with it. It has remained where it fell primarily for ecological reasons, but still serves as a popular tourist destination. Because of their size, giant sequoias can create vast new ecosystems when they fall, providing habitat for insects and animals and allowing new plant growth. It is now known as the Fallen Tunnel Tree.

Visitors to nearby Sequoia National Park sometimes confuse Yosemite's Fallen Tunnel Tree with Sequoia National Park's Tunnel Log. A modest notice of both the Wawona Tree and another tunnel tree appears in the May 28, 1899 issue of a Sacramento Daily Union article: "In the lower grove there is another tree through which the wagon road runs. It is named California and is twenty-one feet in diameter at the base and 248 feet in height."

Pacific Life adopted Wawona as its symbol and trademark in the early 1900s because it symbolized endurance, strength, and protection. The company commissioned sculptor Spero Anargyros to carve Wawona in the foyer of their San Francisco Northern California headquarters in 1956. A replica of Anargyros' Wawona carving was featured on one side of Pacific Life's centenary medallion in 1968.

A number of big trees in California had tunnels dug through them in the late 1800s and early 1900s. The tunnel allowed tourists to drive, bike, or walk through the tree. The tunneling inflicted severe damage to the health and strength of the trees. The tunnels were cut to stimulate automobile tourism. Because of the damaging effects of carving through trees, the practice of creating tunnel trees has long passed.

The other giant sequoia drive-through tree has also fallen:

All content from Kiddle encyclopedia articles (including the article images and facts) can be freely used under Attribution-ShareAlike license, unless stated otherwise. Cite this article:
Wawona Tree Facts for Kids. Kiddle Encyclopedia.