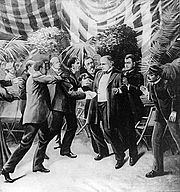 The Assassination of William McKinley in 1901

The 25th President of the United States, William McKinley, was assassinated on September 6, 1901, inside the Temple of Music on the grounds of the Pan-American Exposition in Buffalo, New York.

McKinley was shaking hands with the people when he was shot by Leon Czolgosz, an anarchist. The President died on September 14 from his bullet wounds in Buffalo, New York, aged 58. It was later known that Czolgosz killed the president to try to advance anarchism.

All content from Kiddle encyclopedia articles (including the article images and facts) can be freely used under Attribution-ShareAlike license, unless stated otherwise. Cite this article:
Assassination of William McKinley Facts for Kids. Kiddle Encyclopedia.