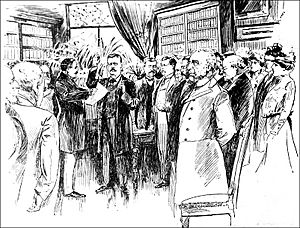 Roosevelt being inaugurated as president, September 14, 1901

The first inauguration of Theodore Roosevelt as the 26th President of the United States, took place on September 14, 1901 in Buffalo, New York. It took place after the assassination of President William McKinley.

John R. Hazel, U.S. District Judge for the Western District of New York, administered the oath of office. While some people called it an inauguration, others called it a swearing-in ceremony.

All content from Kiddle encyclopedia articles (including the article images and facts) can be freely used under Attribution-ShareAlike license, unless stated otherwise. Cite this article:
First inauguration of Theodore Roosevelt Facts for Kids. Kiddle Encyclopedia.