A. P. Lutali facts for kids 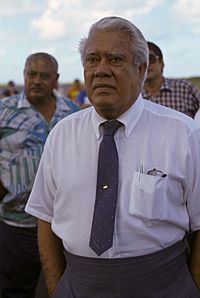 Aifili Paulo Lauvao (December 24, 1919 – August 1, 2002) was an American politician. He served twice as governor of American Samoa from 1985 through 89 and again from 1993 through 1997. He was the founder of the U.S territory's Democratic Party. He had a long career in the legislature and the judiciary in American Samoa.

Lutali was born in Aunu'u Island, American Samoa. He was elected to the American Samoa House of Representatives in 1955 and served as its speaker from 1955 through 1958. Lutali died on August 1, 2002 from complications of a stroke at a hospital in Pago Pago, American Samoa, aged 82.

All content from Kiddle encyclopedia articles (including the article images and facts) can be freely used under Attribution-ShareAlike license, unless stated otherwise. Cite this article:
A. P. Lutali Facts for Kids. Kiddle Encyclopedia.