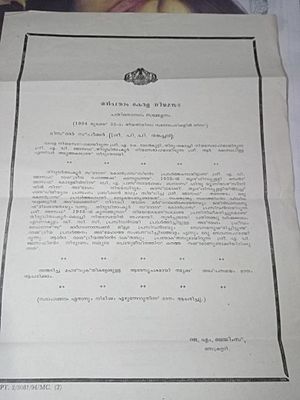 letter from Kerala government on death of Shri AV Joseph

Av Joseph is the son of Ambat Kochuvareed and Annamkuty. He was born on January 13, 1906. After grade school, he went to St. Joseph's college to earn a Bachelor of Arts (BA) degree. He earned an LLB from Banaras Hindu University. He tried to earn a master of arts degree, but he was arrested for freedom fighting.

He was arrested for freedom fighting on the day of his marriage. He spent 2 years in Parur jail. He was the first candidate to pass BA in Edappally and was rewarded by the parish for the same.

He was leader of freedom fighters union for 10 years. He believed in the same ideals as Gandhi.

He was MLA in the Pattum Thaanu Pillai government. In 1960, he ran for a position in the Assembly but lost the election. He was the Dictator of 9th in the Praja Mandalam Congress. He was the DCC President of Ernakulam for 15 years. He was given a bronze citation in recognition of his participation in freedom fighting.

All content from Kiddle encyclopedia articles (including the article images and facts) can be freely used under Attribution-ShareAlike license, unless stated otherwise. Cite this article:
AV Joseph Facts for Kids. Kiddle Encyclopedia.