A Cradle Song facts for kids 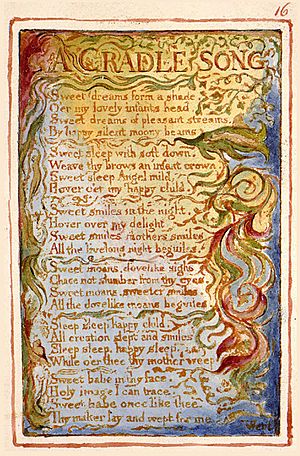 Illustrated "A Cradle Song" in William Blake's Songs of Innocence

"A Cradle Song" is a poem written by William Blake in 1789, as part of his book Songs of Innocence.

The 32-line poem is divided into 8 stanzas of 4 lines each. Each stanza follows an "AABB" rhyme scheme.

“A Cradle Song” follows a couplet structure where each pair of lines rhyme. This lends the poem a graceful sound and makes it easy to sing. While writing this poem, Blake drew from the image of a mother sitting over her infant while the baby is in her crib falling sleep.

Blake was born in London on November 28, 1757. He died on August 12, 1827. He claimed that in a dream his brother Robert taught him the printing method that he used in Songs of Innocence and other illuminated works. Songs of Innocence includes poems about children and the clash between the corruption of the world and the innocence of youth. He uses imagery throughout Songs of Innocence.

In “A Cradle Song”, a mother sings to her child, asking the infant to stay asleep. The mother asks her child to sleep through the night. While she looks at her infant's face, the mother sees Jesus. When she sees the infant smiling, she sees Jesus smiling at her and the world. At the end of the poem, she states how heaven and earth are at peace and have harmony when she sees her baby smile.

There are famous artists that have claimed that they were inspired by William Blake, including Bob Dylan, John Lennon, and The Beatles, Bono and U2, Led Zeppelin, and many more. Some have even used Blake's poems in the creation of their music. In A Charm of Lullabies, Benjamin Britten sets "A Cradle Song" to music alongside four other poems.

All content from Kiddle encyclopedia articles (including the article images and facts) can be freely used under Attribution-ShareAlike license, unless stated otherwise. Cite this article:
A Cradle Song Facts for Kids. Kiddle Encyclopedia.