A Sick Day for Amos McGee facts for kids

A Sick Day for Amos McGee is a 2011 children's picture book written by Philip C. Stead and illustrated by Erin E. Stead. The book depicts a zookeeper who has bonded with the animals he cares for and who come and visit him one day when he gets sick. Phillip Stead wrote the book hoping his wife Erin would illustrate it after a period where she had become discouraged with her art. The book was well reviewed, and Erin won the 2011 Caldecott Medal for her illustrations. The book received praise for its woodblock illustrations and for its message about what friends will do to help and support each other.

Phillip, who goes by Phil, wrote the text specifically for his wife to illustrate after finding an illustration of an elephant she had done. Erin had become discouraged with her work and had quit drawing for three years. Phil, along with the book's future editor Neal Porter, took Erin to dinner to ask her to illustrate the book. After they began working on the book, it took Erin a year to create the pictures for the book, which was the first book she had illustrated. The couple worked together to decide on the pacing of the book and where text could be supplanted by illustrations. Before its release the couple and Porter had low expectations for the book given its "quiet" nature.

The book was released on May 25, 2010. After an initial print run of only a few thousand copies, the book would later have over 300,000 copies printed and be translated into multiple languages. Two audio books, a 2012 version narrated by David de Vries and a 2017 narrated by Jim Dale, were released.

Amos McGee is a punctual man who goes about his day the same way every day. He swings his legs out of bed, puts on a fresh uniform and hops on the #5 bus at 6:00 AM to go to the zoo. While at the City Zoo, Amos always makes time to visit his good friends and always gives them exactly what they need. He follows a reliable agenda of activities with each of his favorite animals: the elephant, the tortoise, the penguin, the rhinoceros and the owl. Amos plays chess with the elephant, who thinks long and hard before each move, races the tortoise and lets him win, sits quietly with the very shy penguin, lends a handkerchief to the runny-nosed rhinoceros, and at dusk reads to the owl, who is scared of the dark. One day, however, Amos wakes up with a terrible cold. He decides that he won't make it to work. Because Amos is a reliable friend, his dear friends start to wonder where he is. Getting worried, the animals leave the zoo and hop onto the #5 bus to Amos' house. To comfort Amos, each animal stretches beyond his or her fears to help a friend recover. Afterwards, they all go to sleep, as they have a morning bus to catch that takes them back to the zoo. 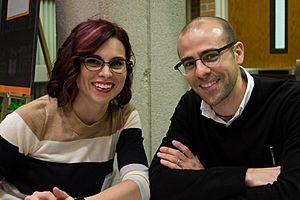 The book has a kind of timeless quality, giving no real indication of the era in which it was created. A Sick Day for Amos McGee is about what friends will do to help each other. Erin's illustrations contain hidden details for the reader to find and which help give the animals and Amos character. These detailed but still subtle illustrations help to contribute to the book's overall feel for the reader. She created her illustrations using woodblock technique and pencils, primarily using muted colors with yellows and red added for contrast. The Horn Book Magazine reviewer Kitty Flynn called the illustrations well drawn to complement the "gentle text". Several reviewers gave particular praise to the book's final pages.

All content from Kiddle encyclopedia articles (including the article images and facts) can be freely used under Attribution-ShareAlike license, unless stated otherwise. Cite this article:
A Sick Day for Amos McGee Facts for Kids. Kiddle Encyclopedia.