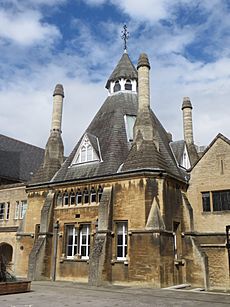 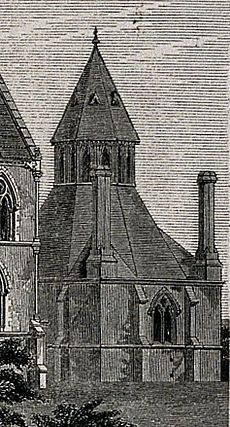 Detail of a wood engraving by W. E. Hodgkin of 1855 showing the Abbot's Kitchen

Chemistry was first recognized as a separate discipline at Oxford University with the construction of this laboratory, attached to the Oxford University Museum of Natural History, and opening in 1860. The laboratory is a stone-built structure to the right of the museum, built in the Victorian Gothic style. The building was one of the first ever purpose-built chemical laboratories anywhere and was extended in 1878. A further major extension adding three wings was completed in 1957. It is still a part of the Department of Chemistry at Oxford University.

The laboratory is beautiful as well as historic.

All content from Kiddle encyclopedia articles (including the article images and facts) can be freely used under Attribution-ShareAlike license, unless stated otherwise. Cite this article:
Abbot's Kitchen, Oxford Facts for Kids. Kiddle Encyclopedia.