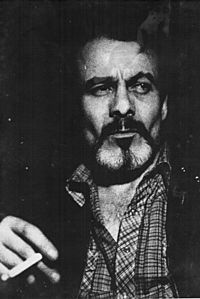 Abelardo Castillo (March 27, 1935 – May 2, 2017) was an Argentine writer, novelist, essayists. He was born in the city of San Pedro, Buenos Aires. He practiced amateur boxing in his youth. He also directed the literary magazines El Escarabajo de Oro and El Ornitorrinco. He was well regarded in the field of Latin American literature.

In 2014 he won the Diamond Konex Award as the best writer in the last decade in Argentina.

All content from Kiddle encyclopedia articles (including the article images and facts) can be freely used under Attribution-ShareAlike license, unless stated otherwise. Cite this article:
Abelardo Castillo Facts for Kids. Kiddle Encyclopedia.